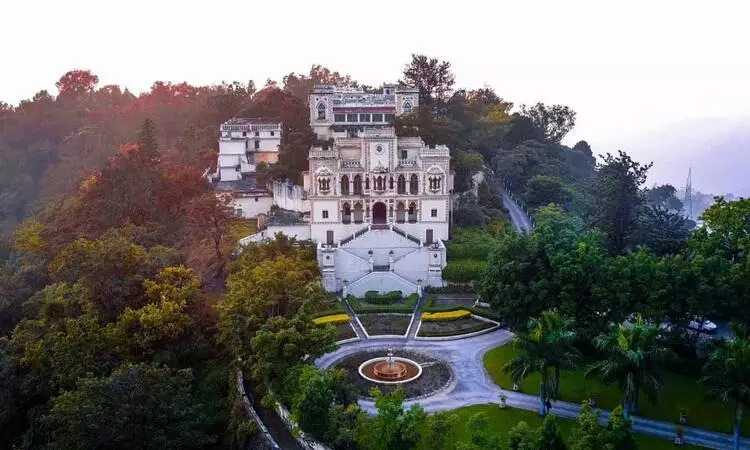 Best of Ananda Himalayas tour is a world-renowned, award-winning wellness destination in India which offers premium luxury spa services. Sitting peacefully on the foothills of the northern India Himalayan region, this spa pans at a massive area of 100 acres of a Maharaja’s palace which seems like it has been frozen in time. This place has been awarded for being the best in the country for offering services like – yoga, traditional Ayurveda, Vedanta complete with healthy organic cuisines to balance out the energies.

The package comes with a day of Rishikesh sightseeing and experiences. You will get to experience the famous Ganga aarti, visit Har ki pauri in Haridwar, visit the bustling ashrams and take a stroll through the narrow roads up to the Beatles Ashram. Saying that you will have a deep spiritual experience is an understatement. Everywhere you go here you will be treated with a feeling of intense spirituality and zen.

What is the ananda in the himalayas experience?

The Ananda tour package will take you to an award winning, world’s number 1 spa destination. This iconic relaxing luxury destination on the himalayan foothills, is serenity at its best. Adding a sense of heritage is the fact that ananda spa is built on top of Maharaja’s palace estate. Blessed with lush greenery and the sound of the gushing river makes a stay here even more peaceful, relaxing and memorable in every sense.

Through this package integrate traditional vedant, ayurveda and yoga practices in one bundle of a relaxing holiday experience. You can even fine tune your package depending on your likings and choices. Focus on your wellness, fitness and rejuvenate your energies. Ananda package offers a regal, royal and holistic experience at its best. Say goodbye to the stressed mind and say hello to a recharged and refreshed new you, because you deserve it.

On your arrival at Delhi airport on the first day of your Ananda in the Himalayas tour, you will be received by the staff of India Tourism Travel and moved to your comforting hotel. We will go for the sightseeing of Delhi’s following attractions once you have freshened up:

Places to visit in Delhi

Qutub Minar: It is one of the UNESCO World Heritage Sites in Delhi. The construction of Qutub Minar was started by Qutb-ud-din Aibak in 1192 and was finally completed by Iltutmish. The imposing minaret is made of red sand stone and constructed in Indo- Islamic architecture style. The 72 m high minaret is of its own unique kind in the world and a prominent landmark of Delhi.

Red Fort: It’s a 17th-century fort complex built by the Mughal Emperor Shah Jahan and is one of the UNESCO World Heritage Sites in Delhi. The construction of Red Fort (or Lal Quila) was started in the year 1638 and it was completed in 1648. It lies along the Yamuna River and prime minister of India addresses the nation from its ramparts on 15 August, which is India’s Independence Day, every year.

India Gate: No tour of Delhi is complete without a trip to India Gate. It is a prominent landmark of Delhi and a national monument of India. Originally it was known as All India War Memorial and have 90,000 names of Indian soldiers engraved on its walls who lost their lives in the World War I. To pay homage to the soldiers who died in the Indo-Pak war of 1971, there is “The flame of immortal soldier” or “Amar Jawan Jyoti” which burns beneath the arch of India Gate throughout the year.

Humayun’s Tomb, Sansad Bhawan, Connaught Place, Rajpath, ISKCON Temple, Akshardham Temple, Jama Masjid, Lotus Temple etc. are other important places of interest in Delhi which we are going to cover today. Dinner and overnight stay will be at a hotel in Delhi.

On day two of our Ananda in the Himalayas tour, we will start for Rishikesh En route we will visit the holy cities of Haridwar and Rishikesh. Haridwar is one of the seven holiest Hindu places in the state of Uttarakhand.

Places to visit in Uttrakhand

Har Ki Pauri: It is a Ghat of river Ganges which was constructed by King Vikramaditya in 1st century BC. Ganga Aarti is performed at Har ki Pauri in the evening every day. Har ki Pauri offers a spectacular view of the river Ganges to the visitors and provides a soul uplifting experience as well.

Mansa Devi Temple: The ancient temple is dedicated to Goddess Mansa and is situated on the Bilwa Hills. It houses two statues of the Goddess, one has three mouths and five arms and the other has three mouths but the arms are eight in number. You can reach to this temple on foot and there is a cable car facility as well through which you can get a spectacular view of the city.

Sapt Rishi Ashram: It is a really beautiful place to visit. You can see the seven streams of River Ganges here. It is believed that seven great sages or the Saptarishis meditated here and River Ganges split into seven streams so that it does not disturb the sages who were into deep meditation.

By evening we will be in Narendra Nagar. Delicious dinner will be served to you at hotel Ananda.

Next day of Ananda Spa in Rishikesh, Ananda hotel was once a palace of King of Narendra Nagar. Its structure was recently modified and the palace is now turned into a heritage hotel. The interiors and the exteriors of the hotel are equally luxurious. Enjoy spa, have mediation and do not forget to admire the panoramic view of the nature the hotel is surrounded with. You can also have the services of Yoga instructors to practice yoga during your stay or have cooking classes also. Billiards, Golf and White Water Rafting are some other activities you can enjoy during your stay at the hotel. Your dinner and overnight stay will be at the hotel.

Day four of our Ananda in the Himalayas tour will be dedicated to the sightseeing of wildlife in and around Narendra Nagar. After having our breakfast at the hotel we will move for Rajaji National Park in Rishikesh.

Rajaji National Park: The national park was created in the year 1983 and three different sanctuaries are part of it which is Rajaji Sanctuary, Motichur Sanctuary and Chilla Sanctuary. It is spread over an area of 820.42 kms. The park falls within the Shivalik eco-system and some fossils which are 10 million year old have been found in it. Rajaji national park has 23 species of mammals and more than 315 species of birds. Apart from the majestic elephants, you can also spot leopards, tigers, jungle cats, sloth bear and deer easily in Rajaji National Park. At night, we will be back to our hotel and enjoy our delicious dinner.

Day five will be the last day of our Ananda in the Himalayas tour. We will drive to Delhi Airport from Narendra Nagar from where you will be boarded into your flight for way back home.

Ananda in the Himalayas Tour ends with Sweet Memories!!

Q.What is the timing for the evening Ganga aarti in Rishikesh?

A. The ganga aarti in rishikesh takes place at 6Pm in the evening, during sunset.

A. Narendra nagar is 45 minutes away from Rishikesh.

A. Although there are tigers living in the national park, spotting tigers here can be very difficult and not a guaranteed sighting.

Q.How many rooms does ananda resort have?

A. It has 78 beautiful rooms in the rishikesh property.

Q.When is the best time to go to rishikesh?

A. March to early july is the best time to go to rishikesh and also because march is the month for international yoga festival.