Orissa, the land of mangroves and the coastal beauty of eastern India is a place with the best natural surroundings. One who comes here would be enchanted with the ecosystem and thrilled by the ambiance. When you visit the Bhitarkanika Wildlife Sanctuary, Orissa, this feeling is enhanced and endorsed.

This sanctuary is located around 190 kms from the city of Bhubaneswar and around 160 km from the city of Cuttack in Orissa. The place is predominantly known for its population of turtles and crocodiles. With a magnificent terrain and a superb atmosphere, the Bhitarkanika Wildlife Sanctuary is an ideal destination on an adventure holiday. 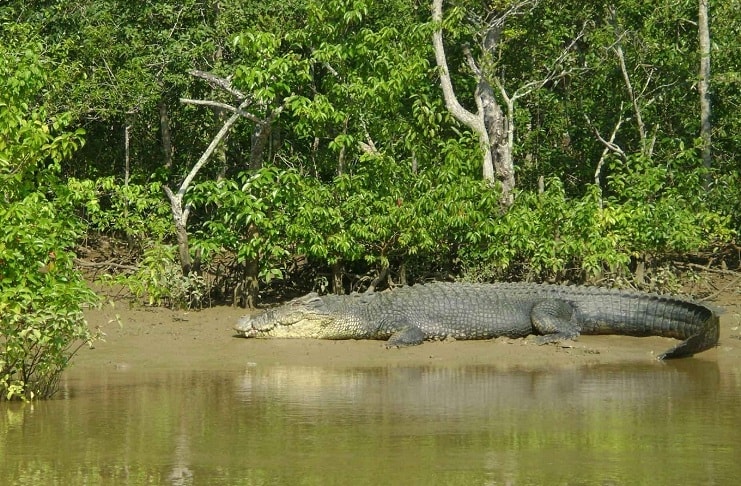 I reached this place from Bhubaneswar which has the nearest airport. You can also take the train and get down at Bhadrak as the sanctuary is around 77 km from here.

With a unique biodiversity and a beautiful landscape the Bhitarkanika Wildlife Sanctuary, Orissa is dominated by mangroves and a diversity of flora and fauna. The cornucopia of vegetation here combined with the plethora of beautiful surroundings makes this place laying in the estuary of the Baitarani and Brahmani a major attraction across India and the rest of the world perennially.

Spanning an area of around 635 km area, this green zone is filled with marshy lands and wet regions. There are around 55 types of mangroves here that are a major nesting ground for all the birds which migrate to Bhitarkanika Wildlife Sanctuary, Orissa from countries like Europe and Central Asia. With Bamboo, Salaia, Teak, Babul, Hair, Palas, Ziziphus, and Karuticulata dominating the vegetation, the sanctuary is also a great breeding locale for the rare species like the white crocodile and also the giant saltwater crocodile. The sight of the crocodiles in this brilliant background of the marshes and the existent fauna seals the stamp of excitement and thrill in this area.

A bird lover’s haven, the Bhitarkanika sanctuary has more than 215 varieties of birds like the Bar Headed Geese, Waders, Hornbill, Brahminy Ducks, White Bellied Sea Eagle, Sea Gull and the Woodpecker. The king fisher bird here has around 8 types of its own kind. With this kind of avifauna, the Bhitarkanika Wildlife Sanctuary, Orissa is a perfect destination while you are on an adventure travel.

When I went to this place, I had already read a lot about this beautiful area in Orissa. So my experience began when I started to go round the place and when I saw the beautiful scenery right in front of my eyes. Reading about a place is different from experiencing it. So when I saw the pythons and the other pestilential reptiles in the park, I was quite enthralled and amazed at the sight of such wild creatures. Then, of course, the park has water monitor lizards, and the flying fox. But I couldn’t see them. But yes, I did see a leopard after the guide who was along with me helped me and after we waited for a good half an hour. Then the park has wild dogs, chinkara, bear, four-horned antelopes and the Blue Bull.

As I went around I came to know that the sanctuary is divided further into a national park too. There is an area of around 145 square kilometers, which has been segregated for the Bhitarkanika national park. IF you are interested to know about the composition of the landscape then this is an ideal spot for experimenting. The ecological, biological and the geomorphologic importance of this park is great due to its beautiful creeks, backwaters, rivers, accumulated land, estuaries and mud flats. The place thus forms the ideal locale for picnics and also is preferred by trekkers, campers and adventure lovers.

Again if you go across the coast of Bay of Bengal here, there is a huge beach which extends over an area of around 35 kms. This beach the Gahirmatha Beach is a place where you can see the Oliver Ridley Sea Turtles nesting.

The motorboat ride that I had while coming here was really enjoyable and as I went round the sanctuary, I could admire the way the state of Orissa is blessed with a fantastic wildlife. Of course, I totally condemn the poaching, illegal encroachments and the hunting activities that are always found in such places and that endanger the animals here. I came back to my forest lodge which was located at Ekakula. There are other lodges at Gupta and Dangmal too. I was glad I had visited the Bhitarkanika Wildlife Sanctuary, Orissa at a time when it was most pleasant. Generally, November to February is a good time to visit this place.

History has it that these mangroves were actually Zamindari possessions in the year 1952. Then the Orissa government abolished the system of zamindars thus the forest came under the control of the state. Thus the Bhitarkanika region was recognized as a wildlife sanctuary in 1975 and the Bhitarkanika National Park came into being in 1998.

With such a rich heritage value, this park is certainly a must visit for all those who like to feel the blessings of Mother Nature.