Come to the land of culture, tradition and Buddhist principles. Come to the kingdom of Cambodia. This is one land which will surely give you all the pleasures of being in a land of the most fascinating Buddhist experiences. If you want to explore the Buddhist sites in the reign of Cambodia then surely it is not a chance that you should miss. So go ahead and enjoy this land of Cambodian pleasures and enhance your Buddhist knowledge here in the Cambodian kingdom. 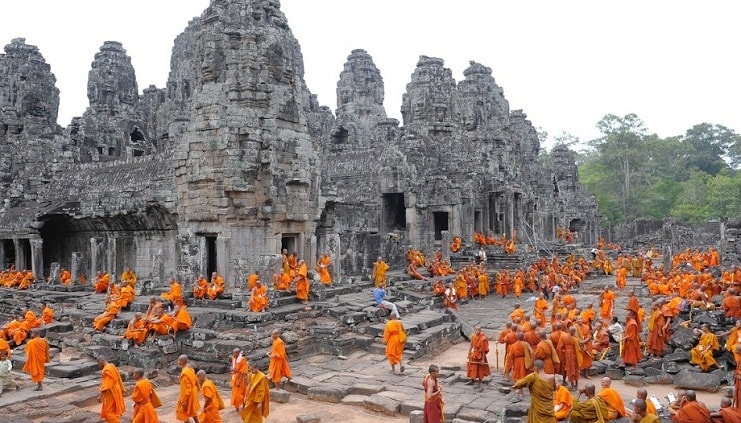 Buddhism here in Cambodia goes back to the time of King Rudravarman who ruled here sometime in the 5thcentury. He was the king of the Funan dynasty. Funan was the first state which represented the Cambodian state. It is said that King Rudravarman is said that to have claimed that his ancestors had a long hair relic of Lord Buddha which they worship. During the time of the 5thand 6th century, there was two languages that developed in the region of Funan. These were the Sanskrit and Theravada and there was yet another language which developed in the 7th century and that was the Pali language.

When King Jayavarman passed away, Mahayana Buddhism was not very popular and then is when the Theravada Buddhism came up. Then the French influence took over sometime in the 19th and the 20th century. This caused a major setback for the growth of Buddhism here. But once Cambodia got liberated Buddhism came back into prominence and became famous.

Thus while on Cambodian travels, there is a lot of Theravada Buddhism influence that is seen here. Cambodia thus permits Theravada monks to thrive here and so we have countries like Laos, Thailand, Burma and also Sri Lanka, to intermingle with the Theravada Buddhist monks coming from here.

Thus Buddhism in Cambodia started getting popular on a national basis as per the requirements of the 1943 and 1948. The clergies of Cambodia have two kinds of monastic orders. These are the Thommayut order and the Mohanikay order. The first order or the Thommayut order came to Cambodia in the year 1864. This became very popular because the royal family supported it and it thus remained in the Phnom Penh region. Then the Mohanikay order is today the larger Buddhist group which comprises of around 90% of the clergy.

Both these Buddhist orders have a hierarchical structure composed of eleven levels. Seven levels from the lower stage are called the Thanakam and the remaining four levels are called the rajagana. In the rajagana we would find around 35 monks belonging to the Mohanikay order. The Thammayut has only 21 such monks. Each monk is needed to serve for a period of around twenty years.

Wat is a spiritual centre in Cambodia which denotes a Buddhist spiritual place. What is normally surrounded by walls and has a residence for bonzes, a sanctuary and also a kitchen and hall. There are quarters for nuns and also a pond. The war has a main entry point that faces east and is used only during events and ceremonies. There are no gates here and the sanctuary has an altar which has a statue of the Lord Buddha.

The sanctuary thus is used only for the bonzes. The hall is a place where there are classes for the monks, meals, and other ceremonies. There are stupas which have the ashes of the family members. These are found near the sanctuary.

Thus Cambodia has a lot of Buddhist temples and has the maximum number of Buddhist monks or Bonzes too. A visit to Cambodia would give you the pleasures of enjoying the Buddhist festivals like the Chol Chnam, the Pchum Ben, the Meak Bochea, the Chol Vassa and many others.

Phnom Penh!!! Yes, this city is often taken for granted by travelers heading to Cambodia. Many travelers skipped this part of town and head straight to Siem Reap where the Angkor Wat is situated. Phnom Penh is the largest capital in Cambodia so give this city a chance as this is where you can learn […]

Ta-Prohm (ancestor Brahma) refers to temple at Angkor in Cambodia built mostly in the 12th and 13th centuries. Initially named as the Raja Vihara (Monastery of the King) built in the Bayon style, the sacred Buddhist temple is just at a km east of Angkor Thom. The temple was discovered by the Khmer King Jayavarman […]

In the south of Cambodia, there are lovely long stretches of coastline, with a selection of beautiful beaches for visitors to enjoy. More and more visitors are beginning to venture to the relatively untamed and raw beauty of the beaches in Cambodia. There are also several islands, which are fairly quiet and secluded. There are […]

Top Things to Do in Lajpat Nagar

Signs of Spring in Canada: Fiddleheads

10 Best Things to Do In Kuala Lumpur with Kids