Japanese temples usually follow a naming system which includes “ji” or “tera” or if on a Mountain “dera” or “in”. So if one of these is in the word, it is likely to be a temple or monastery. It can be confusing because many temples have more than one name.

In Japan they also have a religion called Shintoism. Sometimes there is overlap between Buddhism and Shintoism. One of the treats of visiting temples in Japan is taking time relaxing in their Asian or Zen gardens.

I’m sure you are aware of the horrible disaster in Japan, please send a donation see links at the bottom of this page. And of course, send prayers.

This Was the Very First Buddhist Temple in Japan

The first Buddhist temple in Japan was in Osaka and is known as Shitennoji Temple. It’s history is that was initially built in 593 by Prince Regent Shotoku Taishi who fought against Mononobe no Moriya, head of the Mononobe clan, who was against the introduction of Buddhism into Japan.

Prince Taishi, who was 14 at the time, prayed to Four Buddhist Heavenly Guardian Kings for assistance and when he was victorious thus he constructed a temple and named it Shitennoji (the Temple of the Four Heavenly Buddhist Guardians). 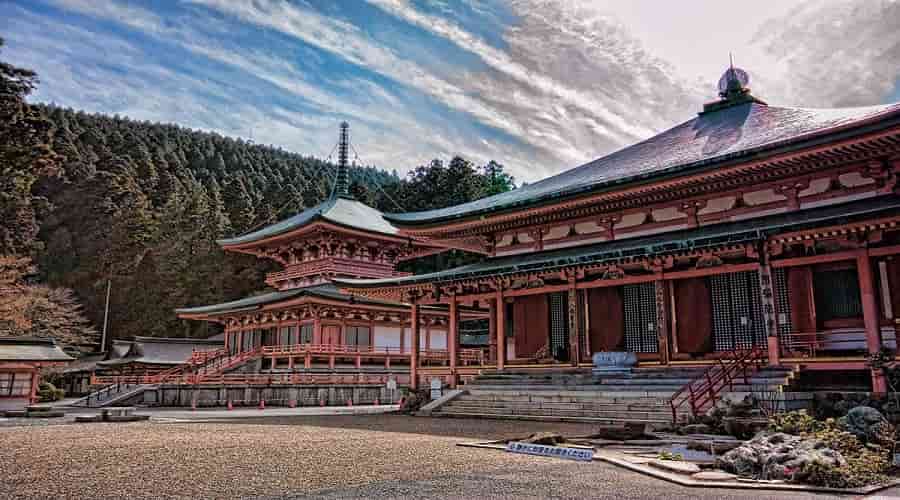 One of the earliest monasteries in Japan was Enryaku-ji which stands on Mount Hiei overlooking Kyoto. This is one of the most significant monasteries in Japanese history. That’s why I chose this particular one. Enryaku-ji served, then and now, as the headquarters of the Tendai sect. The Tendai Buddhist sect was popular among the elite originally and over time became the foundation for a numerous other sects such as the Pure Land, Zen, and Nichiren.

In every Japanese town you will find monasteries and temples and sometimes out in the back country in isolated places as well. So this is just one example. Monasteries will usually have a lovely entrance gate. Many of these offer a chance to stay there so be sure to ask about accommodations.

Shunkoin Temple is Also in Kyoto 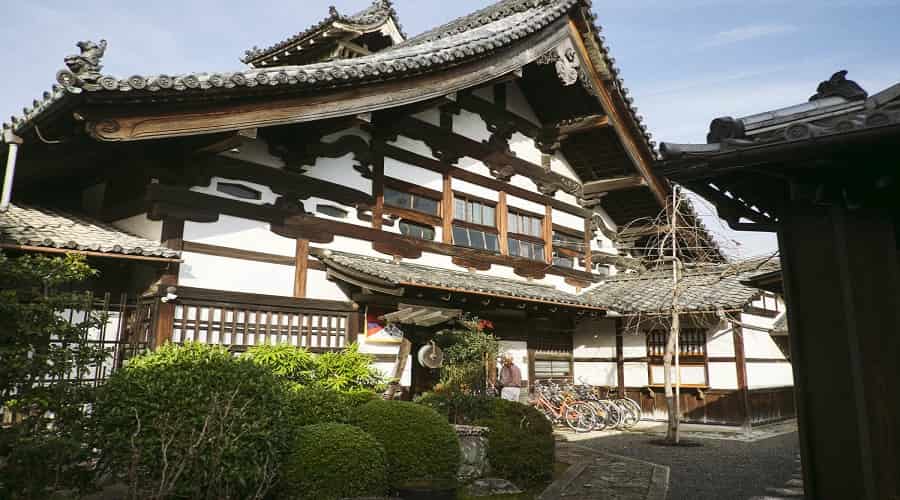 You can stay at a Modern Japanese style guest house at Shunkoin Temple, this accommodation consists two rooms and one shared fully-equipped kitchen. Now you can study Zen philosophy and meditation at this traditional Zen Buddhist temple in Kyoto. 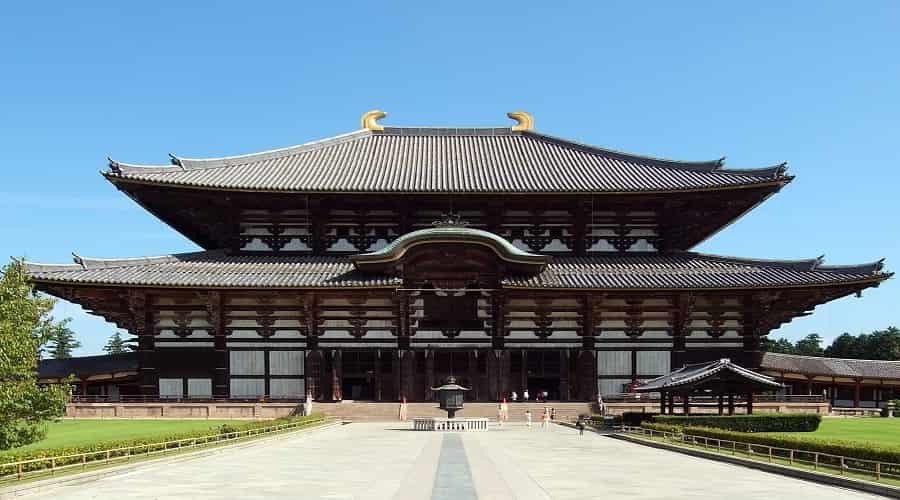 Cherry Blossom season is a fabulous time to visit Japanese temples. Or if you can’t go right now, why not hang a picture in your own home? 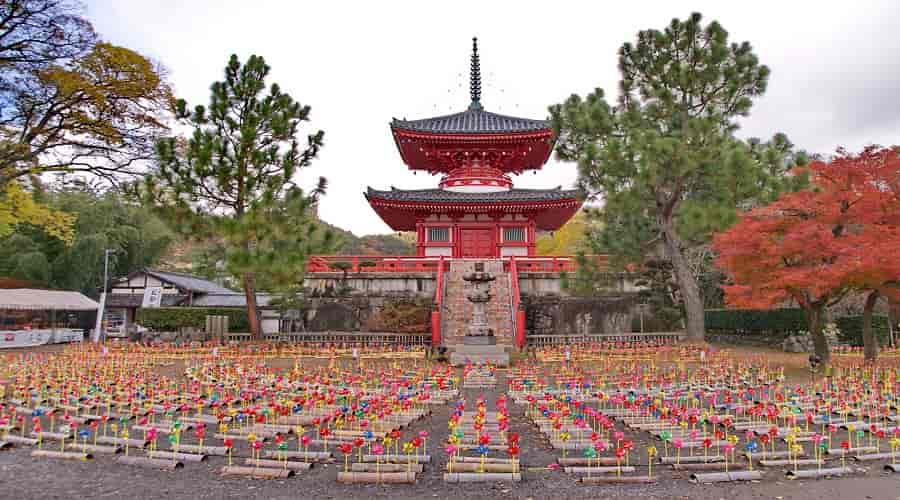 Daikakuji Temple is in Saga, Kyoto and is the historical home of Saga Goryu, the school of Ikebana flower arranging.

Saga Goryu Ikebana has rapidly spread around the world. The Asian Gardens here are particularly known for their rayonnante chrysanthemums which are grown here. The Osawa pond with the Rapids of Nakoso was designated as a place known for its scenic natural beauty, and is also a national historic site.

Sogenji is a Zen Temple in Okayama 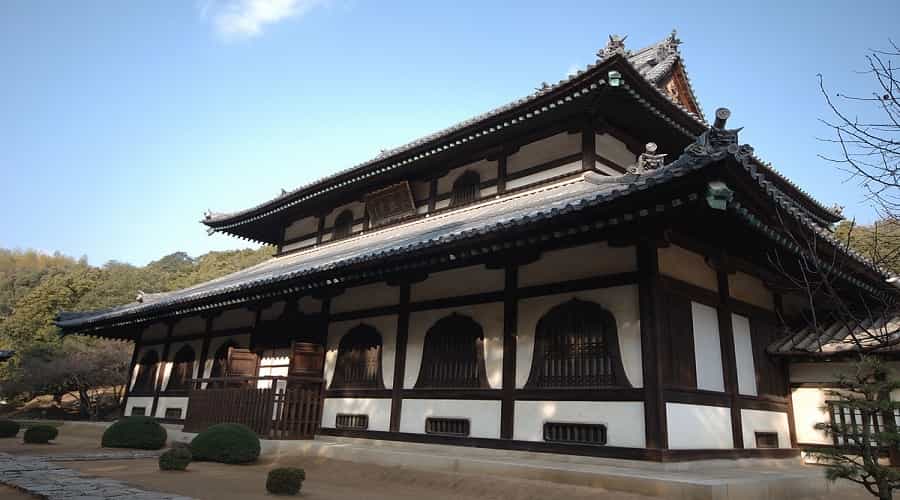 It is usually a good idea to come for a short visit first but the Abbot Shodo Harada Roshi does encourage serious practitioners to come back for a yearlong stay. If you live in the US now, you might want to start out practicing at the One Drop Zendo Tahoma Monastery on Whidbey Island near Seattle. The term zendo means a place to practice and revitalize.

Seiganto-ji is one of the World Heritage Sites Sacred Sites and Pilgrimage Routes in the Kii Mountain Range. This is a photo showing the falls in the background. These sacred sites include the three prefectures of MIe, Nara and Wakayama. Japanese Buddhists regard these spectacular mountains as ‘Jodo (heaven)’.

The Golden Pavilion has three floors and each floor is designed in a different architectural style. What a beautiful spot!

Starting from technologically advanced robots to monkeys playing in the hot springs and luscious bamboo forests- there are many such aspects of Japan that could make one’s trip here extremely enjoyable as well as satisfactory. In my personal opinion, this exceptionally diverse East Asian nation is a perfect amalgamation of eccentric chaos and serene bliss. […]

Japan deserves to be visited for a number of reasons. In a place where tradition, a rich culture and technology are all seamlessly woven together, the result is a country at leads the world on so many fronts – from transport to environmental implications down to robotic production and cuisine – Japan is not only […]