I have enjoyed my visits to the Cameron Highlands. It is a beautiful place and the cool climate makes it a relaxing and enjoyable destination. The place is a bit layback and the people are friendly. You can choose to do as many interesting activities. Or simply sit back and enjoy the cool fresh air. 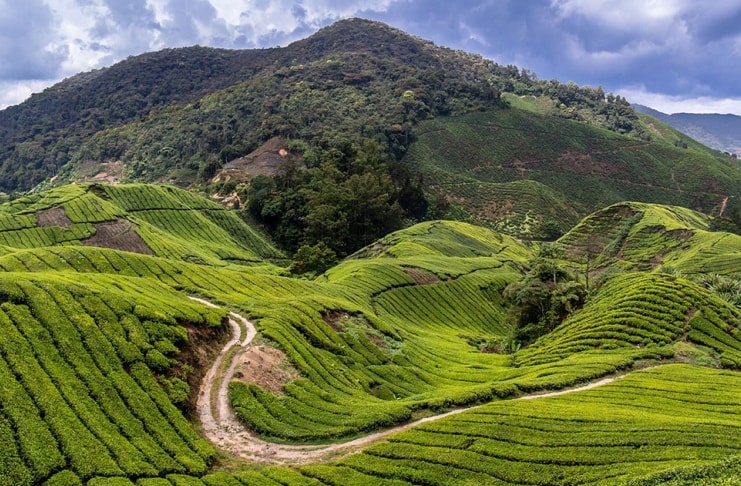 We booked a package tour that included accommodation, a half-day tour and some meals and had a relaxing time there. The pace was slow and my parents enjoyed the visit very much.

Cameron Highlands is a highland resort in the State of Pahang, Malaysia, about 300 km north of Kuala Lumpur in Malaysia. At an elevation of 1,300 to 1,700 metres above sea level, the weather there is cool and provides a wonderful retreat from the hot and humid weather in the lowlands.

Named after William Cameron, a British surveyor who came across the plateau during a mapping expedition in 1885, Cameron Highlands was only developed into a hill station by Sir George Maxwell in 1925, when he visited the highlands. The winding road up the Cameron Highlands was constructed entirely by manual labour. The road was completed sometime in the early 1930s. One can just imagine what an enormous engineering task it was!

Lured by the cool weather, wealthy residents and British government officials started building retreats in Cameron Highlands once the road was constructed. Some even settled in Cameron Highland permanently and a community developed.

The famous Boh Tea Plantation in Cameron Highlands was also started around this period.

One can only reach the Cameron Highlands by road.

Having your own transport and driving yourself around the highlands would, of course, be the best option. This allows you to move around the Cameron Highlands with ease, being able to stop as and when the fancy strikes you.

However, if you do not drive or are not used to the winding mountain road, then the next alternative would be to take a bus or coach. This, however, would limit the places you can visit or reach.

During my first visit to the Cameron Highlands, we went by train and were transferred to a minivan at the Tapah Road Station in Tapah, which took us to the hotel. The minivan took us to many of the places of interest while we were there.

However, in June 2007, my family decided to travel there by coach, as we do not own a car and did not want to make the transfer in Kuala Lumpur.

We took an overnight coach from Singapore, arriving at Tanah Rata early the next morning.

Not having our own transport do limit the number of places we can visit. However, we signed up for a number of half day tours which covered many of the places we wanted to see.

However, if you decide to explore on your own, there are taxis available and if you are adventurous enough, you can also try their local buses.

This is the town where the bus terminal is located.

Alternatively, you can join one of the many tours on offer, which will take you to the many places of attractions.

Things to Do and See in Cameron Highlands

There is lot to do and see in the Cameron Highlands, so unless you have plenty of time, you will have to choose from the many activities available.

Unless you self-drive, the best alternative to seeing the Cameron Highlands is to join one of the day tours.

There are many choices, from the shopping tours, which take one from one town to another to the nature tours, which bring one up close to the flora and fauna of the Cameron Highlands.

We joined two of the tours, one of which was the half-day tour that took us to the different types of farms in the Cameron Highlands and the Cactus Valley. It also took us to the Time Tunnel, where there is an exhibition of old photographs of Cameron Highlands depicting Tanah Rata, Brinchang and some other places. The Time Tunnel is situated next to a strawberry farm, where you can pluck fresh strawberries for a fee.

This tour ended with a sumptuous steamboat dinner.

Tea Plantation
However I find the other tour that we took part in more interesting. This tour starts in the morning with a visit to one of the famous tea plantations in the Cameron Highlands – The Boh Tea Plantation.

The Boh Tea Plantation was found in 1929 by J A Russell. At the plantation, there is guided factory tour where you are shown how tea were harvested, processed, graded and packed. It is an education by itself. You will see your cup of tea differently after this!

The guide took us into the forest and showed the many exotic fauna, flora and fuzzy moss that grow there. We then followed the road to the peak of Gunung Brinchang where there is a watchtower. You can climb up the tower and be rewarded with a commanding view of the surrounding Cameron Highlands. It is breathtaking.

Trekking Through the Forest

This is one of the easier paths for trekking in the Cameron Highlands.

There is a wide range of accommodation in the Cameron Highlands to suit every budget, from the expensive quaint Tudor country houses to the dormitory style accommodation for the budget conscious backpacker.

If you can afford it, the Lakehouse Cameron Highlands Hotel would be a good choice. It is located some distance up from Ringlet with the old English country home design and décor. The interior is furnished with antiques and wooden furnishing, giving it an old English country feel to it.

The last time I was in Cameron Highlands, we stayed at the Strawberry Park Resort, which is situated on a hillside outside Tanah Rata.

For this trip, we chose the Equatorial Hotel Cameron Highlands. The hotel is probably the highest hotel there, sitting on top of a hill at a height of 1,628 metres and overlooking the farming valley. I believe there is a sign at the main entrance of Equatorial hotel proclaiming its height! Unfortunately, we did not see it when we were there. The hotel was quite comfortable and roomy enough for our family of four.

Unfortunately, it is also situated quite a distance from the nearest town of Brinchang. So, unless you have your own transport, you will need to summon a taxi to get around. This was what we did when we wanted to explore Brinchang after one of the tours. The tour ended at Brinchang and we decided to have lunch there instead of going back to the hotel. We also wanted to explore the town. After strolling along the main street for a while, we hailed a taxi to take us back to our hotel.

There is of course other less expensive accommodation in the towns themselves. Transport would be more easily available in the towns.

So, if you are traveling to Asia and would be stopping by in Malaysia or Singapore, you may just want to hop over to the Cameron Highlands for a day or two.

Malaysia exudes a sense of dynamism and unique character that attract hundreds and thousands of foreign tourists all-year round. The country offers diverse experiences to travelers such as nature adventure in the Borneo Island and cultural life in the peninsula. So, you can choose from a wide range of activities for your upcoming Malaysia trip […]

Visit the Most Beautiful Waterfall of Vietnam: The Ban Gioc