Situated in the south-central province of Oregon in the U.S, the Crater Lake is a caldera lake popular for its deep blue and crystal clear waters. Apart from being a magnificent lake in the Cascade Range, it is also a holy lake for the Klamath tribe of the Native Americans.

It is the prime attraction in the Crater Lake National Park and that is moderately fills a caldera of about 655 m deep formed before 7,700 years due to the disintegration of the volcanic Mazama. 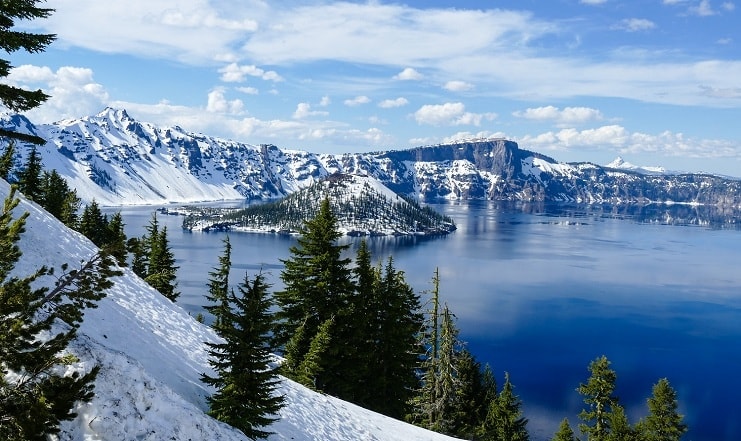 Created near 4680 BC, the lake was the result of the eruption of the volcanic Mount Mazama that was 42 times more powerful as compared to blast of the Mount St. Helens in 1980.

The Klamath Indian tribe of the Native Americans since centuries has regarded the lake as a sacred site. It proclaims that such belief comes from their ancestors who have seen the disastrous event of eruption and miraculous formation of the lake thousands of years ago. According to their legend, a battle was fought between the two principals: the sky god Skell and the god of the underworld, Llao. This battle ended with the destruction of the Mount Mazama, the home of Llao, which resulted into the formation of the Crater Lake.

Further, vision quests were performed on the Crater Lake by the Klamath people wherein it involved climbing the caldera walls and other such dangerous activities. It was believed that the one who could achieve success in such quests is blessed with having more spiritual powers. Even today, the descendants of the tribe have retained the belief of the sacredness of the lake.

In 1853, John Wesley Hillman was the first European American to see this lake, but he named it as the Deep Blue Lake. Subsequently, the lake’s name was changed three times from the Blue Lake to Lake Majesty and lastly to the Crater Lake.

The surface is six miles broad with no cove or passage to the lake. This means that the only source of water for the lake is the huge heaps of snow that fall in it annually. This is because the surrounding area, Crater Lake National Park, is filled greater amounts of snow in the Pacific Northwest. This water in the lake is regarded as among the neatest fresh waters in the world such that the sky’s reflection can be seen on the surface.

For the visitors to explore, Crater Lake holds a major island known as Wizard Island that is the result of the eruption before 7,000 years. Another island, but smaller is size is the Phantom Ship. Do not miss to view the ‘Old Man of the Lake,’ a hemlock tree that since over 100 years is hovering on the lake to reach different areas around the lake due to flowing wind currents.

In the Crater Lake National Park, you can look for day hikes and scuba diving besides only viewing the lake and admiring it.

Is there any phrase more redundant than “Beer Festival?” It’s like saying “Sahara Desert.” Every beer is (or should be) a small party, and if the party you’re attending doesn’t feature beer… well, chances are it’s not a good party. Luckily, summer residents of Milwaukee never have to worry. In addition to being the watery […]

For Good Reason, Organic Foods Are Becoming More Popular Than Ever