Dubai History Guide – From the start of recorded history of the Gulf region, Dubai, ruled by the Al Maktoum family, seemed destined to be the City of Merchants. This is the second largest emirate in the entire UAE which covers an area of 3,885 square kilometres; it is widely believed that Dubai was a port of importance as far back as 3,000BC due to its key location and for being a safe port before entering the Strait of Hormuz and the open sea. Dubai’s location along the Creek (a natural inlet from the Gulf) proved vital for Dubai’s development as a trading port and as a vibrant pearling and fishing industry while also emerging as an exotic destination for people wanting to spend their Holiday in Dubai. The Creek divides Dubai into the Deira district to the north and Bur Dubai to the south. Dubai also includes an enclave called Hatta, situated amid the Hajar Mountains, close to Oman. 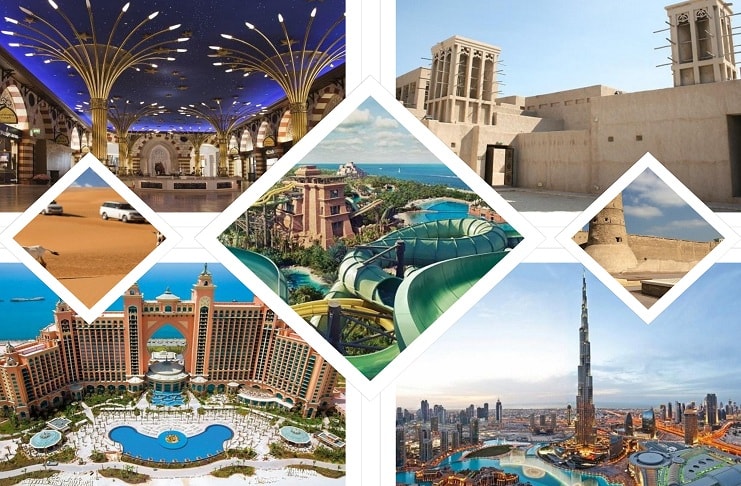 When talking about a city, which the world at large identifies as being the home of the world’s tallest building, it is but natural to chart Dubai’s history from the time of its oldest building that still stands – the Al Fahidi Fort. This fort was built in stages in the last quarter of the 18t” century and has at many times ser as Dubai’s ruler’s palace. (At present it is home to the Dubai Museum.) Soon after its construction, the face of Dubai changed when the Al Maktoum family (descended from the Al Bu Falasah section of the Bath Yas tribe) left Abu Dhabi and moved to Dubai in 1833.

Led by Sheikh Maktoum bin Buti, 800 tribesmen settled down in what was then a small town. Despite his youth, Sheikh Maktoum bin Buti had foresight and capitalized on the advantages of having a natural harbor and established a trading port. Since then, Sheikh Maktoum and his successors have guided Dubai onward in its journey, from its beginnings as a small port town to being a member of the Trucial States to its current status as a growing mega polis.

But to begin with Sheikh Maktoum and the Sheikhs of the other leading centers had to deal with the scourge of piracy in the high seas. So much so that the region was often referred to as the Pirate Coast. After the British defeated the pirates in 1820, a series of maritime agreements were signed between the British and the rulers of the region. Based on further treaties and truces signed in 1892, between the British, Dubai and the other emirates, this region was soon known in the rest of the world as the Trucial Coast or the Trucial States.

Dubai’s modern history has its roots in the decisions taken by its 7th ruler, Sheikh Saeed bin Maktoum Al Maktoum. He took over the reins in 1912 when Dubai was a thriving pearling industry centre and a leading port in the Gulf. However the 1930s saw a sharp decline in the pearling industry due to the global economic depression and the creation of cultured pearls in Japan. All of a sudden the world’s leading jewellers were opting for the cheaper cultured pearls as opposed to the natural but more expensive pearls found off the coast of Dubai. However, Sheikh Saeed had in his farsightedness insisted on diversifying Dubai’s economy and developing the port and the thriving market at Deira, and therefore Dubai continued to flourish in spite of all odds. His good work was carried forward ably by his son Sheikh Rashid who ruled Dubai from 1958 to 1990.

In 1968, Britain announced its intent to withdraw its presence from the Gulf by the end of 1971. Sheikh Zayed bin Sultan Al Nahyan of Abu Dhabi and Sheikh Rashid came up with an initiative to form a federation among the Trucial sheikhdoms. Qatar and Bahrain were also supposed to be a part of the federation in the beginning, but eventually opted for separate statehood. On December 2, 1971, the UAE was formally established and Sheikh Zayed was declared its first President. Sheikh Rashid took over the mantle of the UAE Vice President and later on the responsibilities of the UAE Prime Minister also.

Sheikh Rashid is credited with bringing his father’s vision to life and laying the ground work for Dubai’s future growth. Senior citizens still talk about Sheikh Rashid’s traditional evening majlis, at which his people were given the opportunity to air their grievances to him, and his twice daily tour of Dubai to oversee the progresses made on his projects. These projects acted as the spine for further development and included the Al Maktoum Hospital, which was the very first modern hospital in the Trucial States and the Al Maktoum Bridge (opened in 1963). It spanned the Creek, joining two landmasses of Dubai and Deira and effectively getting rid of the unnecessary long trip around the creek’s head. Another project was the Dubai Airport (opened in 1961), which helped Dubai to leap frog into the category of an ideal stopover destination and then the ideal destination itself.

He also ensured that the Creek, which had been silted up during the 1950s, was dredged up. This allowed the shipping lines to use Dubai as their main port in the Gulf. Sheikh Rashid also oversaw the construction of Port Rashid (1972). Originally designed for four berths, it was eventually expanded to thirty five. A second port was later on constructed at Jebel Ali (construction was completed by end of the 1970s), just south of the city. An imposing harbour with sixty-seven berths it is, today, the world’s largest manmade port and could be seen from space. And with typical foresight Sheikh Rashid founded the Jebel Ali Free Zone, around the port, in 1985. The same year saw the Dubai airport becoming the home base for the newly founded Emirates Airlines. And while oil was discovered in Dubai in 1966, Sheikh Rashid continued with his ancestor’s policy of encouraging and strengthening Dubai’s trade roots.

After Sheikh Rashid’s demise, in 1990, Sheikh Maktoum was crowned as the new ruler of Dubai. He also took over the portfolio of UAE Vice President and Prime Minister from his late father. Sheikh Maktoum had ruled Dubai between the duration of November 1990 and January 2006. He had been groomed for this job from the beginning as he had always been his father’s right hand man. A great philanthropist, he also funded a number of humanitarian projects all over the world. Sheikh Maktoum also oversaw the construction of an impressive road network, sporting facilities (tennis, golf and racing), modern parks and gardens that are at par with such facilities and systems in the leading cities of the world. The Dubai International Airport also underwent an expansion to reflect Dubai’s status as the regional aviation hub.

While traditionally Dubai’s sheikhs have been huge fans of falconry, Sheikh Maktoum also gets the additional credit for making Dubai a byword for the best of international horse racing. He and his brothers were responsible for running the extremely successful Godolphin stables and Sheikh Maktoum was known for being the most successful horse owner, in Europe, in 1997.

The Maktoum brothers carried forward their father’s vision and dreams with projects like the establishment of the Dubai Internet City, the Dubai Media City and the Dubai Knowledge Village, which ensured that the majority of the world’s major business players have a presence in Dubai. Today the government of Dubai has not only incorporated information technology into Dubai’s trade and industry, but also made it a part of its governance itself. Dubai’s e-government portal opened up in October 2001, which gave Dubai the world’s very first completely online government. Dubai also moved into the world of international finance, with the opening, in 2002, of the Dubai International Financial Centre.

And to reflect its status as not just a transit point, but as a major tourist destination itself, the airport has undergone further improvements and expansions, with the state-of-the-art Sheikh Rashid

The Maktoum brothers helped aid the growth of Dubai as a tourist destination with many initiatives, especially the popular Dubai Shopping Festival – an annual event wherein the majority of stores in Dubai offer huge discounts on their goods. But the most attractive feature of the festival is the Global Village, where various countries represent their culture and heritage through musical and dance performances and with the exhibition and sale of traditional handicrafts, clothing and food. Alongside this, Dubai has also gained global recognition for its architecturally cutting-edge designs that mix the modern and the traditional – be it the sleek Emirates Towers or the Burj Al Arab.

Dubai’s current ruler Sheikh Mohammed has over the years guided Dubai forward, despite the ups and downs buffeting the world today. He has ensured that Dubai gained global recognition not just for its architecturally cutting edge designs that mix the modern and the traditional; but also for its capacity to be a safe haven for its citizens, residents, global traders and tourists.

Innovation and creativity marks the design of the unique Palm Island Dubai. This engineering feat is sometimes referred to as the eighth wonder of the world. The Palm Island Dubai was especially created to promote tourism in Dubai. The island offers world-class facilities and services for discerning travelers who come here to enjoy the serene […]

Most Popular Places to Visit in Dubai

Dubai is thought to be a standout amongst the most appealing and luxurious vacationer goals in the Middle East. Due to its ever-growing popularity as one of the prime visitor spot and alluring incomes from the sector of tourism, various flights to Dubai are made effectively and easily accessible nowadays. However, you will be required […]

3 Cool Tips to Have a Fun RV Trip

Places in India for Adventure Experiences with Family