Located at Gopachal, just about 100 meters above of the city, the Gwalior Fort is one of the most unconquerable forts in India, constructed by Raja Man Singh Tomar in the 15th century. The fort spreads out over an area of 3sq km, bounded by sandstone solid walls, which enclose three temples as Teli Ka Mandir, Saas-Bahu-Ka-Mandir and Chaturbhuj Mandir, six palaces and a number of water tanks. The Mughal Emperor Baber referred to the Gwalior Fort as Tomars, Mughals, Marathas and British, who lastly handed over to the Scindias. 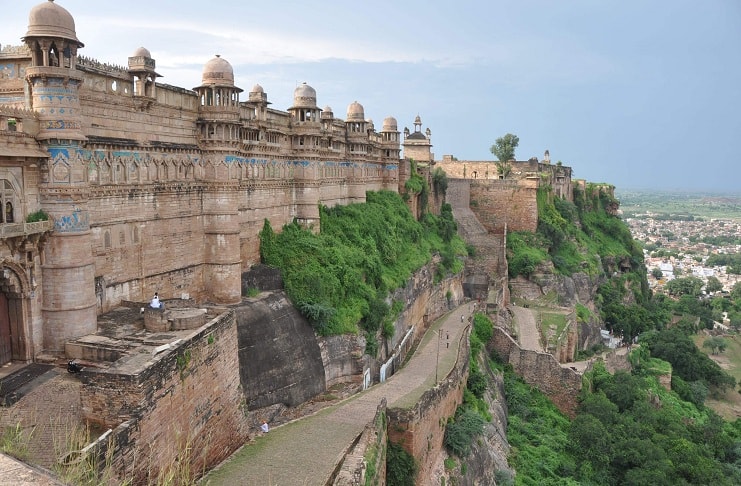 In accordance with a myth, the history of Gwalior traces back to just about 1000 years. On the hilltop where the fort is situated, dwelt a hermit named Gwalipa who cured Suraj Sen of leprosy by giving him a drink of water from the Suraj Kund which is still there in the fort. He also was renamed him Suraj Pal and said that if he and his descendants kept the name Pal, they would remain in power. His 84th descendent yet, altered his name as well as he lost his kingdom.

The Tomar family came to power in Gwalior in 1938. Raja Man Singh, who ascended the throne in 1486 incidentally, was the greatest of the Tomar rulers. He drove back an assault on the fort by Sikandar Lodi of Delhi. In 1516, Ibrahim Lodi laid siege on the fort. Raja Man Singh died but his son held on to the fort for one year before surrendering. After the Lodis, the fort passed into the hands of the Mughals who held on top of it till 1754, when the Marathas imprisoned it. The next 50 years saw the fort change hands many times prior to passing into the hands of the Scindias. In 1857, the troops shocked against the British in insubordination of the ruler who remained loyal to the British. It was close to this fort that Tantia Tope was defeated and the Rani of Jhansi also killed here by British Soldiers.

Teli Ka Mandir:
It was built in the 9th century. The roof of the temple is built in the “Dravidian” style with “Indo- Aryan” decorations. The front entrance to the shrine is 10m high and is topped with a carving of the Garuda. The whole shrine is covered with sculpture.

Saas-Bahu-Ka-Mandir:
This shrine also was built in the 9th located proximity to the eastern wall. The Mother-in-law and Daughter-in-law temple is similar in style. There are figures of Lord Vishnu over the entrance of the shrine. Four huge pillars support the large roof of the shrine.

Chaturbhuj Mandir:
It is known as the shrine of four-armed and it is devoted to Lord Vishnu and it was built in 876A.D, is located in the northeast entrance to the fort.

Aran Palace or the Kirti Mandir situated on the western side of the fort. It is a long two-storied building.

Jauhar Kund:
Jauhar Kund is nestled in the Shah Jahan Mahal, is a very deep tank where the women of the harem committed Sati after the defeat of the Raja in 1232.

Gujri Mahal:
Gujri Mahal was built for queen Mrignayani by Raja Man Singh in the 15th century. At the present time, the Archaeological Museum is housed within this palace.

By Air: Gwalior has its own airport which is situated at a distance of 8 kms from the main city. There are a number of airlines which connect Gwalior to other major Indian cities and metros which include – Indore, Mumbai, Bhopal, and Delhi among others. These services take place thrice every week.

By Rail: Gwalior also it’s own railway station which enables travelers from all over the subcontinent to pay this wonderful town a visit. The place is also accessible due to its presence on the Delhi, Mumbai and Delhi Chennai railway link.

By Road: Gwalior is blessed with a well-connected network of roadways which run all over the city and is linked with some of the most major towns and cities of India. If you are planning on taking your own car for the trip then you will be easily covering some other nearby sightseeing destinations.

Gwalior experiences extremely arid and scorching summer months which lasts from March to June and makes traveling unbearable since the temperature reaches up to 48 degree Celsius. The monsoon months of July to September is received with much relief by the locals of Gwalior. This season also offers relief from the heat wave. The winter months in Gwalior, which lasts from October to February, witnesses an overall cool climate. With temperatures dipping low it offers the visitors an opportunity to look around without having to deal with the scorching heat.

There are a few tourist destinations that offer a trip down the history with a slice of natural beauty. Bhimbetka, a natural art gallery and an architectural treasure in Madhya Pradesh is one such destination. With more than 500 rock shelters, Bhimbetka is a true representation of immense awe and wonder in the soul of […]

Madhya Pradesh is popularly known as the “Heart of India ” because of this geographical position and it is also second largest state by area , and the fifth largest state by population. It is one of the state which is surrounded by other states on all its sides. There are so many historical places […]