Humans have traditionally found gold to be the most valuable of metals, and so have used it decorate those buildings and objects that we find the most important. We are especially fond of using it to honor our deities as can be seen by the Sri Harmandir Sahib, or Golden Temple, which is plated with gold. The temple’s beautiful appearance is intended to honor the gods and to enhance the importance of the religious ritual that takes place within the walls. 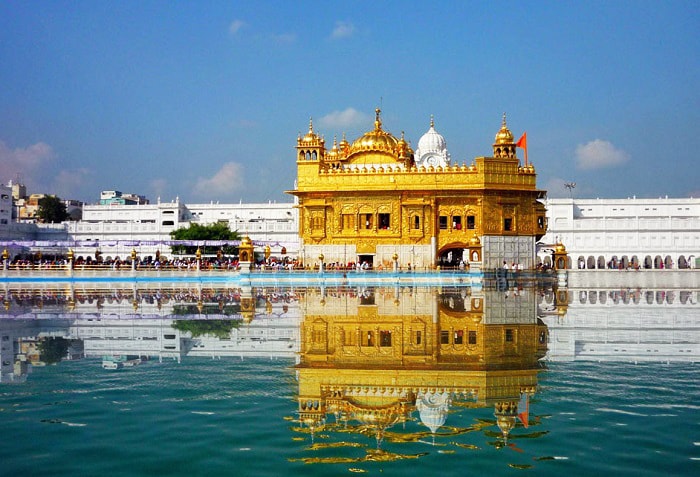 Construction on the temple began in 1588 CE. However, the first development of the area began almost twenty years earlier. Construction on both the Amrit Sarovar and the town that took its name from the pool, Amritsar, began in 1570 CE and was completed seven years later. Later, Guru Arjan Sahib and a Muslim, Hazrat Mian Mir Ji, laid the foundation of the temple in the center of the pool. Guru Arjan Sahib had long planned for a centralized place of worship for Sikhs, and he intended Sri Harmandir Sahib to be that worship Center.

The temple is supported by a platform in the center of the Amrit Sarovar. The temple itself is a square, three-story building, with a door in each of the four walls to show that all are welcome. Above the main sanctuary’s central hall, the third story rises as a small room with three doorways. Regular readings of the Guru Granth Sahib scriptures occur here. Above the third story room is a low dome.

There is a causeway running from the temple to the mainland, and the Darshani Deori arch stands at its end. The causeway is connected to the Pradakshina, a path that passes in a circle around the main building and then leads to the Har Ki Pauri, or “steps of God.” Continuous readings of the Guru Granth Sahib also occur on the steps.

The architecture of the complex as a whole is a beautiful mixture of Muslim and Hindu styles, which some experts believe should be categorized as an unique Sikh type. Perhaps the most eye-catching part is the fact that while the two lower stories are marble, the upper story and the dome are plated in gold. This is supposed to give the building of unfolding like a lotus flower, and it is breath-taking viewed either by day or lit up at night.

The city of Amritsar that has grown up around the Golden Temple is accessible by plane, train, taxi, rented car, bus and either cycle- or auto-rickshaw. Most of the flights into the city come from Delhi, which is only an hour away, but there are numerous international flights that connect through to cities such as London, Toronto, and Barcelona. There are also flights to Central Asia. Trains run to the city from New Delhi, Mumbai, Varanasi, and Kolkata, along with some bus lines. Long-distance taxis and rental cars can be hired, and rickshaws, local buses, and taxis make the trip in from Pakistan.

The Golden Temple isn’t the city’s only attraction. Make sure to visit the Jallianwala Bagh, a reminder of how in 1919, British Indian Army troops had brutally killed a whole gathering of men, women and children, killing more than 1500 people in ten minutes. The Mata Temple, or Sheesh Mahal, is a Hindu cave temple dedicated to Lal Devi. It has been described as “labyrinthine” and “psychedelically unique.” Women who want to become pregnant often pray at this temple.

There are interesting activities outside the city, too. Eleven Kilometers away from Amritsar is Ram Tirth, the location where the sons of King Rama and Devi Sita were born. Worshipers travel to Ram Tirth to pray to these deities. Also, the closing of the border ceremony that takes place between India and Pakistan, featuring a “march-off” between the soldiers of the two nations, is a fun event to watch. Foreign tourists should bring their passports so they can sit in the reserved area. If you have a visa, you can even cross the border into Pakistan.

There is plenty to eat and drink in Amritsar. The Golden Temple has a dining hall which serves a free basic meal to all comers – try it, if just for the experience. There is a voluntary donation box, and because the dining hall is inside the temple complex, you will be required to remove your shoes along with covering your head. For Western and Chinese food, there are the Country Inn and Suites hotel, My Kind of Place, and Pizza Hut. New Punjabi Rasoi, Kesar Da Dhaba, and Bubby Dhaba serve Punjabi food. Lassi is a popular drink in the city, and alcoholic drinks are sold at licensed liquor stores.

Hotels and guesthouses are provided at a range of prices. The Golden Temple offers free, very basic accommodation – although donations are considered a requirement. Be respectful and observe the rules, especially those prohibiting smoking and alcohol. The Hotel Sita Continental and the Tourist Guesthouse also are good budget lodgings. Mid-range hotels include the Hotel CJ International and the Hotel Sarovar Plaza. High-end lodgings include Green Acres Haveli, a luxury farmstay, Ranjit’s Svaasa, and Hotel Swarn House. If you wish to access the Internet, there are several webcafes with reliable connections, including Cyber Swing, Cyber Pub, Reliance Web World and Sify Internet.

Visitors to and worshipers at Sri Harmandir Sahib say the atmosphere of spirituality there is more valuable than the golden temple walls. It is an ideal place to learn more about the Sikh faith, if you wish to go with an open mind and see for yourself.

India can be an economic choice for shopping to foreign guests. Each state and each region in India has a different item or thing to offer. From general things to specialized items of the region, everything is available. There is nothing to fear in India for tourists-men and women if they want to indulge in […]

Turkey offers fascinating places of destination to all travelers. From the breathtaking skyline of Istanbul to historical Roman ruins, you will never find yourself bored during your most-awaited Turkey trip. These top 10 Turkey tourist attractions will surely enrich your trip, so you will have plenty of stories to tell and pictures to show your […]

Planning to tour around Asia for a different type of adventure? Before you start packing your bags, you may want to check out these top 10 best places in Asia that appeal to people of all ages. Read along and discover what makes each city worth your time. Hong Kong, China The island of Hong […]