This 7th wonder of the world has always been the eternal representation of undying love. Over the years many lesser known facts and interesting stories have surfaced which show us that this white structure has a lot more to it than what meets the eyes. Located in Agra, Uttar Pradesh and lined by Yamuna River on one side the place is a true mark of expert craftsmanship and engineering.

Taj mahal was built by Shah Jahan the 5th king in the line of the Mughal rulers as an ode to his favourite wife Mumtaz who passed away during childbirth. He is credited with being a great lover of architecture and this is clear with his contributions which includes Jama Masjid, Red fort among other small structures. Taj Mahal has been recognised as one of his finest creations and even till date people from all over the world flock here on a daily basis to witness its elegantly opulent grandeur. Especially during the full Moon Nights. 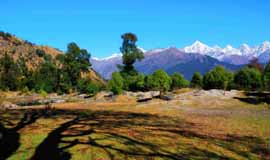 Here are some of the most interesting and quirky facts about Taj Mahal which may have not known in the past:

Towers are Leaning Out

The 4 minarets or towers surrounding the main central structure of the Taj Mahal are not constructed straight but rather are leaning outwardly. This was a smart engineering move done by the architects so that in case of an earthquake these towers would not fall right on the tombstone but would fall away from it. This was done as a safety measure.

During the British rule in India the garden surrounding Taj were changed into formal lawns in order to replicate the manicured lawns in London, England. Originally keeping in mind the liking of Shah Jahan the lawns and gardens were filled with a large collection of daffodils and roses that used to keep the air here fragrant and sweet smelling at all times.

Small Hole on the Ceiling in Main Hall

Just perpendicularly above the main tombstone of Mumtaz mahal there is a small hole on the ceiling. If the stories are to be believed this was done as an attempt by one of the artisans to sabotage the making of this masterpiece when he came to know that the king was planning on amputating all the artisan’s arms after the completion. There definitely are some flaws in Taj but the beauty outranks it.

During the 20th century when the world was engulfed in the deadly World War 2, the majestic Taj ceiling was covered in a massive scaffolding by the ASI to misguide the bombers and ensure safety for the Taj. Then later on during the India – Pakistan war of 1971 and even for some time after the tragic 9 / 11 incident which shook the world, Taj was again covered in a giant green coloured cloth which worked as a giant and effective camouflage.

The Amputation of Artisans is a Myth

It has been a long standing belief that all the artisans who were involved in the creation of Taj were amputated by shah Jahan. There is no truth in this story since later on the head architect responsible for Taj Mahal – Ustad Ahmad Lahouri, went on to make other spectacular works of art for the king. It can be a metaphor for signing the contract that did not allow them to work with anyone else.

The complex consists a working mosque where the local Muslim population of Agra go every Friday to offer their prayer to the lord. Before visiting remember that this is an active religious place hence held pious for a lot of people so remember to dress accordingly. During the prayer hours on Friday the visitation is also closed off for the general public.

Did you know that Taj Mahal is 45 feet taller than one of the tallest structures in Delhi – Qutub Minar. Its highest point rises up to 73 metres and is taller than the Hagia Sophia in Istanbul but is smaller than the St. Peter’s Basilica in Vatical city that stands tall at 138 metres.

Shah Jahan spent a whopping amount of 32 million rupees during the years of 1632 and 1653 to complete this magnificent structure. In present day this amount would be somewhere around 1,062,834,098 USD. This was a very extravagant amount even as per the current modern days.

In order make sure that the water pressure in each fountain is equally pressures and undiminished each fountain had their own pots with their own regulated pressure which would go off at the same time and remain uniform throughout. This is not possible if the fountain pipes are connected to a single copper pipe feeding all of them. All this was to ensure that Taj’s every single element is perfect and the best.

The graves of the deceased queen were created keeping in mind the respect towards their Islamic traditions which forbids decoration of graves. The graves of Shah Jahan and Mumtaz are actually buried underneath a small crypt just under the main inner chamber. For visitors a replica of the grave is placed just above the main one to give them a good idea of what it actually looks like since crypt visits are now not allowed.

The Small Groves on the Inlayed Walls

The interior and the exterior walls of the Taj are adorned heavily with fine inlay works which were decorated with precious and semi-precious stones. However, when it was plundered by robbers and the British, these precious gemstones which were imported from Tibet, China and other south eastern locations, were pried out of walls leaving nothing but empty holes and grooves. One cannot begin to imagine the glory of the Taj during its peak days.

Taj Mahal was built using sparkling white marble brought in from Rajasthan. However due to horrible and rising air pollution it has now turned into a dull off-white colour and close to almost being yellow. In order to curb this only electric vehicles are allowed close to the monument and the visitors will have to walk or take an electric bus from the parking area till the main entrance of the monument.

Calligraphy on The Walls

The highly detailed calligraphy all over every inch of the walls of Taj Mahal are all taken from the holy book of Quran. Apart from the walls these verses are also inscribed on the tomb of Queen Mumtaz Mahal and shah Jahan. These calligraphies are so beautifully done that they look like remarkable designs which only elevate the beauty of this place.

Shah Jahan Not Permitted to Enter

During the later years of his life shah Jahan was not allowed to enter the Taj he got built with so much love and care. 9 years prior to the king’s death he fell very ill which started a war for the throne amongst his sons. However, shah Jahan recovered but it was too late by then Dara Shikoh and Aurangzeb were already fighting. Since shah Jahan was on Shikoh’s side, on winning, he imprisoned his father and killed his brother. Till his last breath shah Jahan was not able to set foot inside the Mahal.

Every line and feature in the entire Taj complex is in perfect symmetry with each other. However, the 2 tombs located inside are not in the perfectly equal size which is the one and only thing which is not symmetrical here, this too is due to a belief that the male tomb had to be larger while the female tomb has to be smaller.

All great things are not created in a day and during that time with the absence of heavy-duty machinery and tools this iconic structure was built in 22 years with the help of labourers from all over India as well as south East Asian countries. Mumtaz passed away in 1631, the construction started in 1632 and the main mausoleum structure was completed by 1643 which later on was extended by 1648. The surrounding buildings and the gardens took 5 years to be completed.

Taj Mahal will continue to mesmerise the future generations to come and its glory will only increase with time each day.

Agra is one of the fascinating places on the face of the planet and the credit goes to the splendid monument also called the monument of romance and love, the wonderful Taj Mahal. It is said that India is known by the Taj Mahal and the same is very true. Taj is the complete example […]

Adventures in The Arabic Lands