Located in the Tibet Autonomous Region of China at the base of the holy Mount Kailash, Lake Manasarovar, called Mapam Yumco in Tibet, is among the highest freshwater lake on the planet. Regarded as the most sacred lake in Asia, the lake is worshipped by three main sects namely, Hindus, Buddhists, Tibetan Bonpo, and Jains for its legendary stories. Being almost round in shape and as deep as 90 m, the lake is connected with its neighboring lake via a natural Ganga Chhu Channel. Kailash Mansarovar Yatra will introduce you to the lake’s beauty which can be seen in its twin colour waters – from a clear blue on the shores to a deep emerald green in the centre, which is more captivating if seen in moonlight. 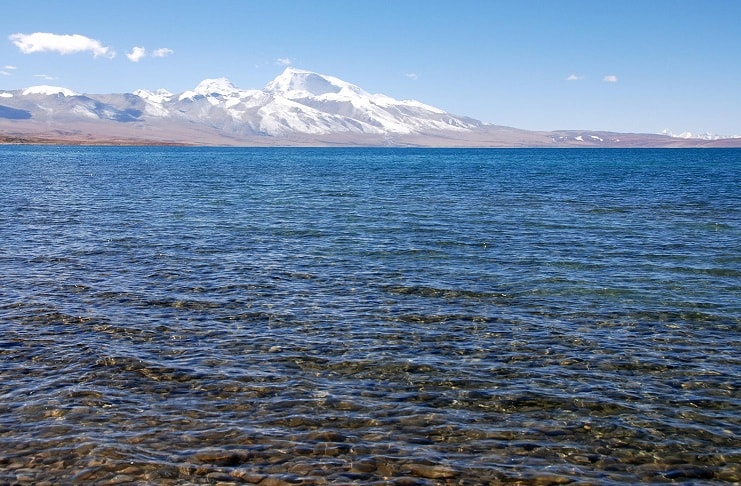 The Mansarovar Lake is the origin of the eastern and large tributary of the River Indus named River Sutlej. Further, close to the lake are also the mouths of the river Brahmaputra, Indus, and Karnali (Ghaghara) – a vital tributary of the Ganges. This also has added to the holiness and purity of the lake and its surrounding regions. Above all, Mount Kailash is considered to be the abode of Lord Shiva and his divine consort Mata Parvati on Earth.

According to the Hindu Mythology, Lord Brahma, the creator of the universe and lake too, first formed the lake in his own mind, thus giving the Sanskrit name where Manas means mind and Sarovar means lake. Lord Brahma created this lake to ensure a proper place for religious ceremonies and more merit for his 12 sons who were holy men and observed rituals and asceticism here on the dry land.

A popular belief holds for Hindus that a walk around trip of Mount Kailash and a dip in the cold Lake Manasarovar destroys one’s sins from many lifetimes and consequently brings salvation from the phases of birth and death. Other faith is that the heavenly Gods (Devas) come down from their celestial abodes to bathe in the lake every day in the early morning between 3 and 5 am – called the Brahma Muhurta.

The lake is also believed to be the summer residence of the sacred birds, swans that symbolize wisdom and beauty. Some other beliefs are that the Lake Mansarovar is the home of purity that once touched will lead the soul to heaven and that if you drink its water, you will be in the heaven of Lord Shiva after death.

For Buddhists, the lake is linked with the Lake Anotatta in Pali and Anavatapta Lake in Sanskrit where Queen Maya had mystically seen Lord Buddha. According to the legend, the celestial gods brought Buddha’s mother here where she bathed in the holy waters of Mansarovar to purify her body. It was here that Lord Buddha entered her womb when after bathing; she saw a white elephant coming to her from Mount Kailash.

In the past, there were eight monasteries on the shores made so to represent the Wheel of Life. By walking around the lake on pilgrimage, devotees used to visit each of the monasteries to form a part of the turn of the wheel. Today, many are not seen and what is present is the most remarkable surviving Chiu Gompa Monastery on the steep hill.

The spiritual journey is 64 miles around the lake that takes four days. So, if you desire to take up that fruitful deed, pitch a tent by the lake and complete the trip.

Buddhism is a very popular religion in China and is very widespread. It has a very ancient history which goes back to 2000 years. As per the geographical areas and Chinese languages, the Buddhist here can be divided into Han Buddhism, Theravada Buddhism, and Tibetan Buddhism. Han Buddhism is found in the Han group, the […]

Romancing the Stones at Mahabalipuram

Rishikesh – The Hub for Adventure Activities in India