If we talk about sacred pilgrimages, two places in the world are the most famous –The north-eastern group of cities in India (Haridwar, Varanasi and so on) for Hindus and Mecca in the middle-east, for the Islamic. Mecca is center of pilgrimage for the followers of Islam and is also the place where Prophet Muhammad was born. Mecca lies in the mountainous region of central Saudi Arabia. The legends say that Adam and Eve had wandered for 200 years after they fell from Paradise onto the earth. They were then made to unite on Mt. Arafat, where the present day Mecca is situated. Adam built a similar shrine as the one in Paradise. After many generations, Abraham received instructions from God and he along with Ishmael (his son) rebuilds the shrine. Following them, Abraham was able to reveal perfect location of the Archangel Gabriel, and the holy Ka’ba was built using the stones from the five sacred mountains. When the shrine was completed, Gabriel brought a magic stone to the sanctuary. With time, the rituals of Abraham were combined with various pagan rituals. The pre-Islamic pilgrims visited the house of Abraham and the stone of Gabriel, along with many stone idols of Mary and Jesus and many others. The most significant of all the deities were that of Allah, which is the Arabic word for God, and later he became the solitary God for the Muslims. 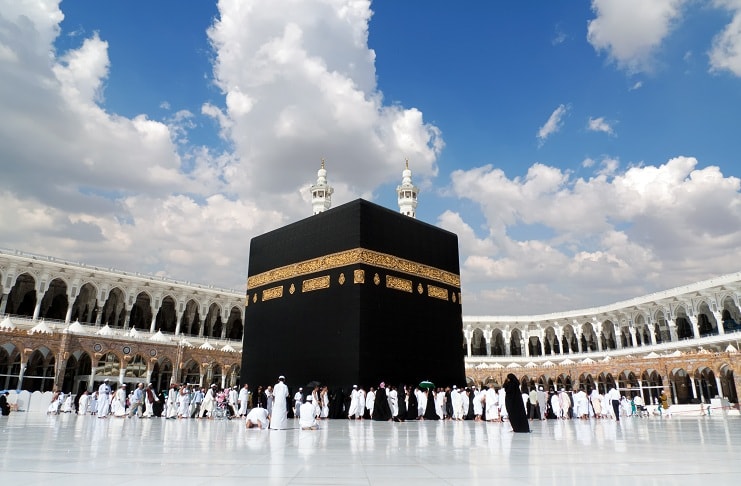 During the time of Prophet Muhammad, from 570 to 632 AD the holy city of Mecca reached its major religious significance. Muhammad took Mecca under his control in 630 and destroyed the pagan idols, except those of Mary and Jesus. The Hajj Pilgrimage to Mt. Arafat was joined with the different rituals of Mecca, and the Ka’ba was declared as the most important place of the Muslim. The Ka’ba, the Zamzamwe and the sacred hills of Safa and Marwa are located within the vast structure called Haram al-Sharif, which means ‘The Noble Sanctuary’. There are seven very tall minarets and 64 gates that form the outer shell of this colossal building. At a time more that 1.2 millions of holy pilgrims can be inside the holy structure and is the largest mosque in the world. The word Ka’ba means cube, and, thus, this sacred place is cubically built and the roof is flat. It is raised to fifty feet, with corners oriented towards the compass points. The walls to the east and west are aligned to sunrise at summer solstice and sunset at the winter solstice. Though the surrounding structures of Ka’ba have gone through tremendous reconstructions and changes since the 7th century, Ka’ba still remains as it was when Muhammad existed.

All followers of Islam (male or female) are required to do the Hajj pilgrimage and one of the five pillars of Islam. The pilgrimage takes from 8th to 13th of the month of Dhu al-Hijjah in the Islam’s lunar calendar, every year. The main aim behind making the Islamic attend Hajj every year is one measure to unify Muslims from all over the world, and currently Mecca has succeeded in gathering about twenty lakhs of people every year. Located in the south-east corner of Ka’ba is the sacred stone, which is kissed by the pilgrims, after they take seven rounds in counter-clock direction around the Ka’ba, in the mosque. The pilgrims also visit other places in the vicinity of Mecca, which include Muzdalifah, Mt. Arafat and Mina and then go back to the sacred Ka’ba.

The Muslims kneel down to pray to their God, five times in a day and they face towards the direction of the Mecca. Thus, an invisible bond, called qibla, is said to form between the devotees and Mecca, and so Muslims are said to, virtually, visit Mecca, five times a day. In fact, all the mosques in the world are supposed to be built with their entrances facing Mecca. One can find pictures and paintings of the holy Ka’ba, depicting various ways and modes of traveling to Mecca around the world. Often, these are pictures of a pilgrim praying on a holy carpet inside the Ka’ba. Mecca is also regarded as the magnet of explorers.

Jeju Island is a beautiful island located in the Korea Strait off the south coast of South Korea. It is popular with both domestic and international tourists and there are plenty of reasons to visit Jeju Island when exploring interesting South Korea. The island is sometimes referred to as the Island of the Gods – […]

Where to Go in China China is a fascinating place for a vacation. Along with some other beautiful cities it is also getting developed if we look at the reports then we can find that Shanghai and Beijing are approaching towards modernism but at the same time there are some other  cities which are unchanged […]