Situated in the southeastern coast of the Arabian Peninsula Oman is one of the most thriving holiday destinations in the world. filled with incredibly enthralling and mesmerizing places to visit Oman is every nature buff and history lover’s paradise. The entire landscape is dotted with majestic structures and forts which date back to the Middle Ages making a trip here extremely memorable. Oman’s terrain seems extremely surreal and otherworldly with jagged rocks and mesmerizing sites. If you are looking for an experience which will stay in your memory for years to come then Oman is definitely the place to be. This Oman travel guide covers all the important and vital aspects of visiting this incredibly beautiful holiday destination. 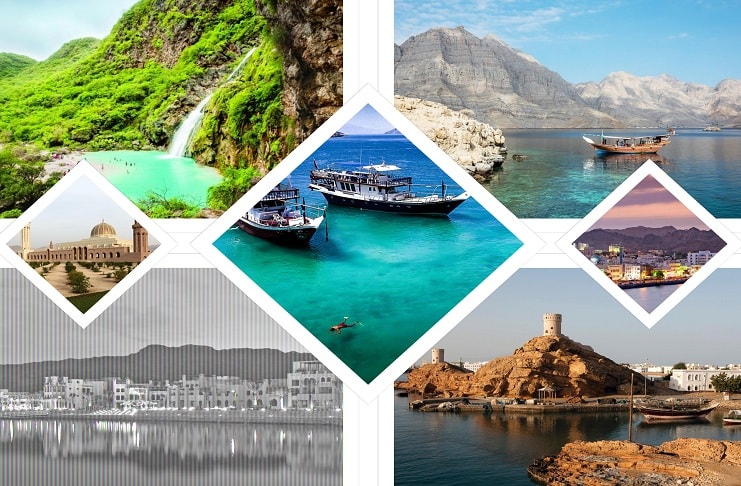 When looking for facts about Oman, travelers or tourists can always research online to find important details about the country.

Oman is in the Southeastern part of the Arabian Peninsula. This Asian country is bordered by Yemen in the southwest, United Arab Emirates in the northwest, the Arabian Sea engulfing the country from the south to the east and the Gulf of Oman in the northeast.

The Sultanate of Oman’s capital is Muscat. Muscat is also the sultanate’s largest city. Natives of Oman speak Arabic but other dialects are also spoken in the country. English, Urdu, Hindi, and Baluchi are also spoken in Oman. The ethnic majority in Oman is the Omani Arab, the second largest group are the Indians, followed by the Pakistani, Sri Lankans and Bangladeshis along with Iranian groups, Somali and Egyptian minorities.

The Sultanate is an absolute monarchy like the way it used to be in olden times. The country however was conquered by the Portuguese but later gained independence from Portuguese rule in the year 1651. Even if the country was conquered by a predominantly Christian nation, Oman’s main religion is Islam. However, there are still a few Shia, Suuni, Hindus and Christians in the country.

A long time ago, Oman was one of the richest countries of the world thanks to the incense trade but later on when incense was no longer in demand, the country became poorer.

Oman packs a lot of history and along with that are myths about the city that traded Frankincense. This city, according to legend was buried in the desert.

Where is Oman Located?

What Language Is Used In Oman?? Many people who plan to go to the Asian country ask this question mainly because they are a bit afraid if the people will actually be able to understand them when they are there.

In business, English is widely used but most people in Oman do not understand English that much. Like any Islamic state, Arabic is the main language of the Omani people. This form of Arabic however is still the same with original Arabic just with a few alterations. In Saudi Arabia, the people from cities speak a different brand of Arabic compared to the Arabic spoken by Saudi Arabians in rural areas. This is the same with Oman, Arabic in one area can be a bit different compared to another area. People from Oman still understand each other of course because there are not many changes in the language just a few localized additions or versions.

Migrants from all over the world who visit Oman or stay in Oman permanently also speak Arabic but some of them also speak other Asian languages such as Chinese, Filipino, Korean, among others.

The Red Tide of Oman 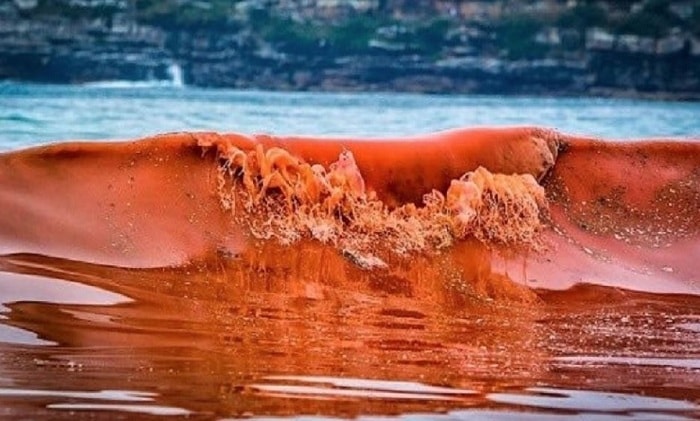 The red tide of Oman has always been a hot topic when talking about the Asian nation. Just last year, the Omani coastline was affected by red tide yet again.

This biological phenomenon is caused by algae overgrowth hence also called algal blooms. Algal bloom is very common not only in Oman but in the Arabian Gulf and this usually happens in the months of March to September. The red tide of Oman is a natural phenomenon but many experts believe that algae overgrowth in this part of the world is also aggravated by human activity such as global warming and water pollution.

What happens when there is red tide? During red tide season, the seawater usually changes its colour. Sometimes it is red and sometimes it becomes green. The sea water also emits fumes making it very unpleasant for people who want to take a swim. Red tide however is not just something that annoys beach goers; it also kills marine life since the sun can no longer penetrate the water. In effect, everything underneath the surface dies. It destroys marine ecosystems and kills thousands of fishes.

The red tide in Oman is a special case because the country is an example of how environmental changes can have an impact on businesses that rely on the sea. The most direct impact experienced by the Omani is the death of a large number of fish in 2001 and the year after that. Omani fishermen did not have anything to catch during that time and this has affected the country’s domestic revenue.

Oman culture takes its roots from Islam. The country’s main religion is called Ibadi Islam or Ibadhism –this religion was founded by Abdullah ibn Ibadh in the 7th century AD.

However, not all people from Oman practice this religion; some of them are Shia and Sunni Msulims. Omanis are not as strict as other Islamic states. In fact, the country tolerates other types of religion to be practiced in Oman.

Ramadan along with other Islamic festivities are important parts of the Omani society and like other countries, Oman also has its very own national dress. For the Omani men, the Dishdasha, a white collarless gown is worn. Sometimes the colours vary – from brown to lilac to black. Apart from the Dishdasha, men also wear a Muzzar or a turban. On special occasions, men also use a cane called the Assa.

For Omani women, a dress called a Sirwai is worn with a headdress called the Lihaf. These dresses with trousers underneath are usually very colorful-from red to green to pink to yellow. Women also adorn themselves with gold jewelry when the Sirwai is worn, making the garb rather enchanting –reminiscent of the glory that Oman had centuries ago.

Omani food is delectable. Most are simple dishes that use chicken, fish or mutton splashed with marinade or sprinkled with Omani spices. Unlike most food in Asia, Omani cuisine is not spicy at all but like its Asian neighbours, Oman is big on rice.

AS a sign of hospitality, people of Oman treat their guests to a cup of Kahwa – Oman coffee that is popular all throughout the region. 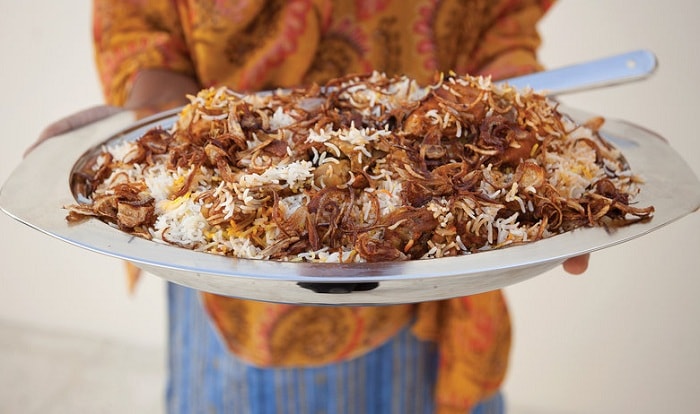 Oman food is both nutritious and exquisite. Food lovers and enthusiasts will love the Shuwa, an Omani dish composed of meat marinated in herbs and spices and cooked in slow fire for two days.

This dish is usually cooked in clay ovens located underground, making the taste of the Shuwa very distinctive. Oman, like other Asian countries usually serves rice with their main meals but unlike its Asian neighbours, most of its dishes are not spicy.

Another Omani favorite is Mashuai – this is kingfish with lemon rice. Mashuai is a rather delectable meal that will surely whet the appetite of every traveller. If you are fond of rice dishes, you should also try Maqbous – this is rice cooked with saffron that is served over spicy meat. Most people love using red meat when preparing Maqbous but many also use white meat.

For dessert, a gelatinous and sticky delight made out of sugar and dates and flavored with rosewater, cardamom and saffron should be your first option. This sweet is called the Halwa and it is one of the most popular traditional Omani dishes. Lokhemat or sweetened balls of flour that is deep fried and served with citrus syrup is also another dessert; every traveller should get a taste of.

After dessert, having a cup of Kahwa is advised. Kahwa is not only the Omani traditional coffee; the strong bitter brew is also a symbol for Omani hospitality. Kahwa usually goes with dessert but you can drink this after dessert as well if you opt to.

Holidays to the Maldives