Ganesh Chaturthi has to be one of the most awaited festivals of the year when the streets are lined with colourful decorations and the whole atmosphere is doused in a deep sense of spirituality making it one of the best times to visit Mumbai. The best part about this holy holiday are its elaborate and opulent Pandals which the Mumbaikars love visiting. Going from 1 Ganesh Pandal to the next is like a tradition now and is explored not only by the common people but also by big time celebrities. From the rhythmic Ganesh chants of ‘Ganpati Bappa Morya’ to the maddening crowd and delicious Prasad every aspect about Pandal hopping in Mumbai is worth it.

This year the iconic festival is set to take place on 2nd September but before that one must know about the significance of Ganesh Chaturthi. The ritual is a 10 day long celebration which marks the birthday of lord Vinayak or Ganesha, the younger son of lord Shiva and goddess Parvati. The festival celebrations commence on the 4th day of the Shukla Chaturthi i.e. on the 4th day of the waxing moon and ends on the 14th day of the same which is named as the Anant Chaturdashi. Massive Ganesha idols and grand scale enigmatic a festivity ensues here during this time which ends with the Visarjan of the Ganesha idols.

Here are some of the popular places in Mumbai famous for their Pandals making it a must visit: 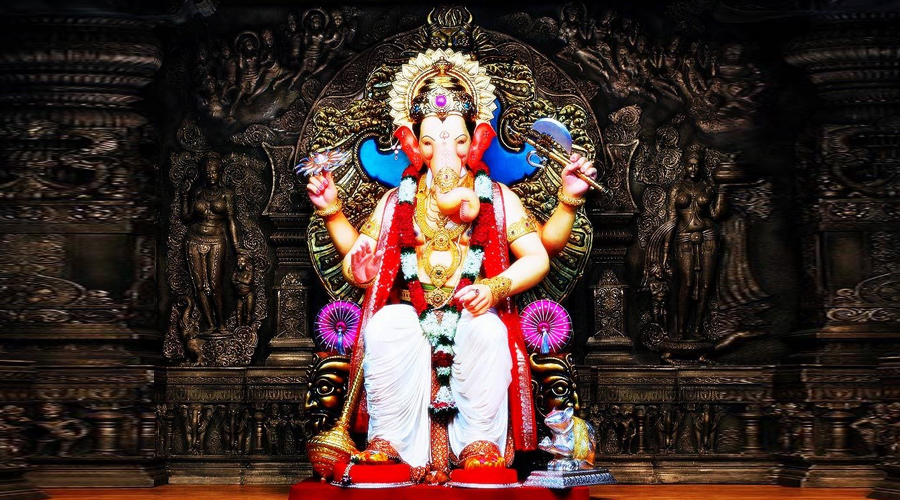 Also referred to as the Lalbaugcha Raja and dating back to 1966 this is one of the most vibrant Pandal celebrations that takes place in Mumbai. This particular place is visited by religious enthusiasts from all over the world to experience the unique theme it adapts every year. along with the religious significance they are also known for organizing blood donation drives as a way of helping those in need. This year the Ganesha idols will be seen in various different avatars and will surely be a treat to the visitors making it one of the most famous Pandals in Mumbai and is attended by bigwigs like Alka Yagnik, Priyanka Chopra, Shatrughan Sinha, Ravina Tandon, Nana Patekar etc. 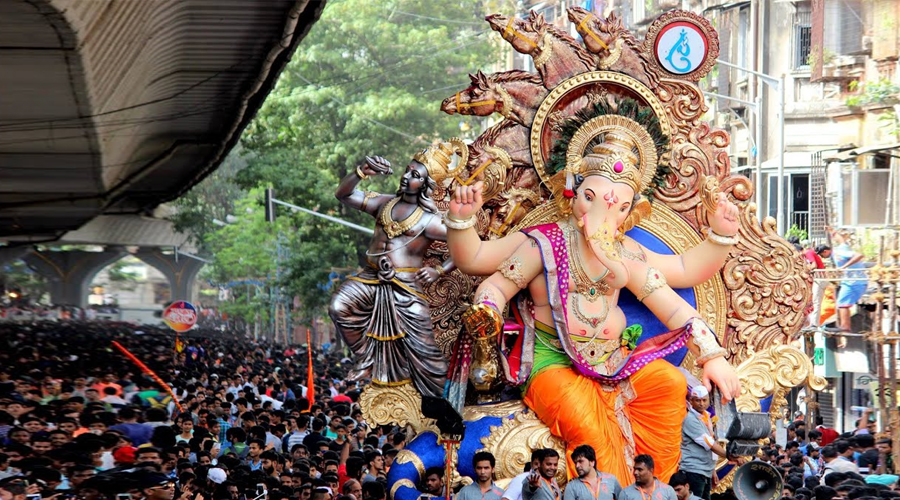 Founded in the year 1920 this particular Pandal was founded in the year 1920 and is famous for being the oldest Pandal for Ganpati celebrations. Although the lanes surrounding the Pandals are small and crammed still it is graced by the presence of lakhs of devotees to honour the grand statue of the lord. the Pandal celebrations of Chinchpokli was commenced by around a group of 20 to 25 people of the Sarvajanik Utsav Mandal and ever since then it has been the epicentre for Ganesha celebrations and a must visit in the list of Pandals for Chaturthi celebrations in Mumbai. 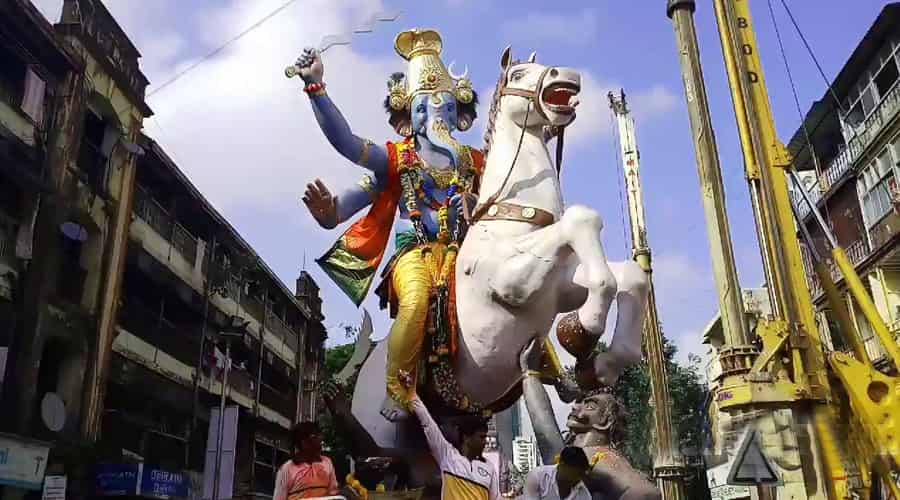 Last year this was one of the most talked about and ranked among one of the most visited Pandals in Mumbai. Here the Ganesha was seen seated on top of a massive horse which was a never seen before site and it surely garnered a huge audience of devotees. The initial years saw the lord seated majestically atop a tiger as well which made it the talk of the town. This year also they promise on pleasantly surprising their visitors. Other than this the vibrant atmosphere and spiritually evoking feeling offered in this Pandal is incomparable to anywhere else. 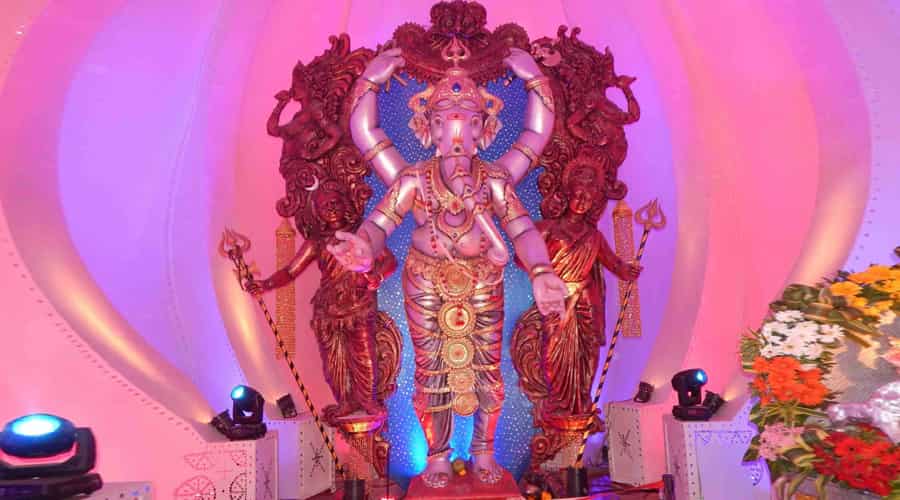 Everyone has seen the idol of Ganesha seated on 1 horse, the special thing about this particular Ganesha Pandal is that the idol of the lord depicts being seated on 5 horses which is a sight to behold! it has been voted as one of the best idols in Mumbai and very rightly so, due to the presence of elaborate idols and carvings. This Pandal was established in the year 1939 and the tradition has been carried on ever since and is visited by devotees from not only nearby localities but also from all over the world. One must definitely visit this display of grand devotion and spirituality when in Mumbai during the holy occasion of Ganesha Chaturthi. 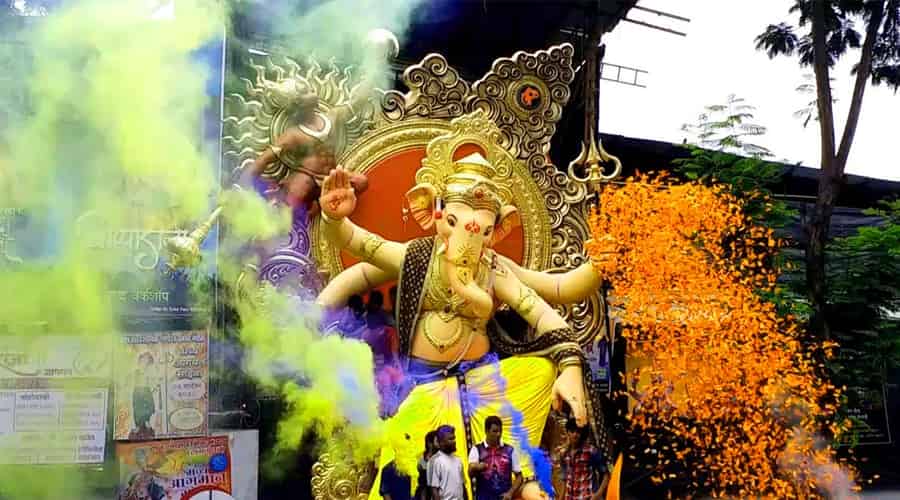 The Mandal for Dongricha raja was established in the year 1939 and is a very special Pandal since it is set up with great enthusiasm and vibrancy in a Muslim dominated area. This doesn’t matter though since every ritual here takes place with great love, respect and peace. Another interesting thing about this Pandal is the donation camps organized by the Mandal as a motive of helping out those in need and lesser fortunate people. Their unique themes are one of the major attractions and the most awaited attractions here for e.g. in the year 2017 the theme was dedicated to the Indian Army. This year the Ganesha will be seated in the form of Raje Shahi and the collections will be donated to the Indian military forces. 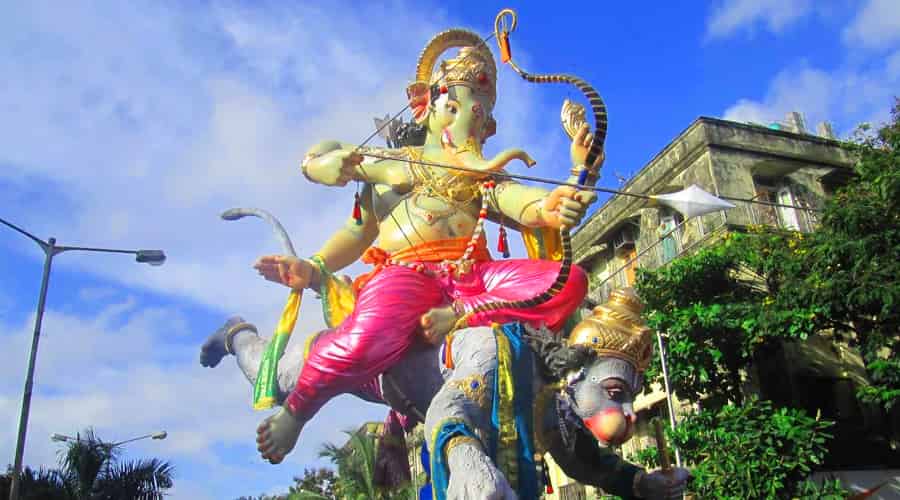 The idol in this particular Pandal has acquired the attention of all the devotees from far and wide. Here Ganpati Bappa can be seen standing majestically next to a ferocious tiger and on top of Mahishasura while being surrounded by a multi headed Sheshnaag. the towering elaborate Ganesh Murti here also displays 8 arms which is a rare sight and ranks among one of the must visit Pandals in Mumbai. The idol here also won the best Pandal prize in the year 2012 and it has been among one of the most awaited places to visit in Mumbai during the holy occasion of Ganesh Chaturthi. As the name suggests this Pandal is located in close proximity to Chira Bazaar and marine lines making it extremely accessible and the celebrations here are well known across the nation.

no matter where you go for Pandal hopping in Mumbai you will be having the time of your life with loving people, friendly locals and an overall atmosphere of devotion and spirituality to the lord. However these few places are a must visit if you are looking for a wholesome and enigmatic way of spending Ganesh Chaturthi.

India is famous for being the land of ancient gods, rich heritage and traditions which date back to centuries. Each state of India is dotted and adorned with numerous temples from ancient times. Several of these temples have water bodies present in front of them which has served as a source of water and a […]

Also commonly known as Trivandrum, Thiruvananthapuram is the capital city for the state of Kerala. Along with being the largest and the most populous city in Kerala, Trivandrum is also famous for its hill stations, Backwaters, Beaches, lagoons and wildlife sanctuaries. Trivandrum contains more than 100 recognized Ayurveda centers. Recuperation facilities, which help you to […]

Pilgrimage Places in Uttarakhand You Should Visit during Your Chardham Yatra

Devbhoomi is a rather apt name for the beautiful land of Uttarakhand, for its picturesque landscapes are complemented by the sacred spiritual abodes strewn across its terrains. It’s as if the land is akin to a beautiful poem coloured in the shades of spirituality. The state could well endorse itself as the land of pilgrimages […]