In an another great attempt by the Indian government to embrace spirituality and make religious destinations easily accessible at budget-friendly rates, Indian Railways unveiled the Shri Ramayana Express on November 14th. The aim of this sacred tour is to take the passengers across all the iconic places associated with the life and times of Lord Ram in the form of an all-inclusive travel package which lasts for 16 days. This circuit is an attempt to take you on a journey on a path that was led by Lord Ram himself. The passengers will be able to retrace the steps of Lord Ram and experience an unparalleled feeling of spirituality. The Shri Ramayana tour offers you the opportunity to choose from two different packages, one package will cover all the important places in India while the other one will be covering all the places in Sri Lanka as well. This holy and extremely pious initiative was taken up by the Indian railway minister Piyush Goyal who was not only present during the unveiling ceremony of the train but he had also congratulated the passengers on their maiden voyage. The journey will commence from Jaipur before reaching the Safdarjung railway station at New Delhi. This 800 seater express train will also come with an IRCTC service tour manager who will be there for the convenience of the passengers. 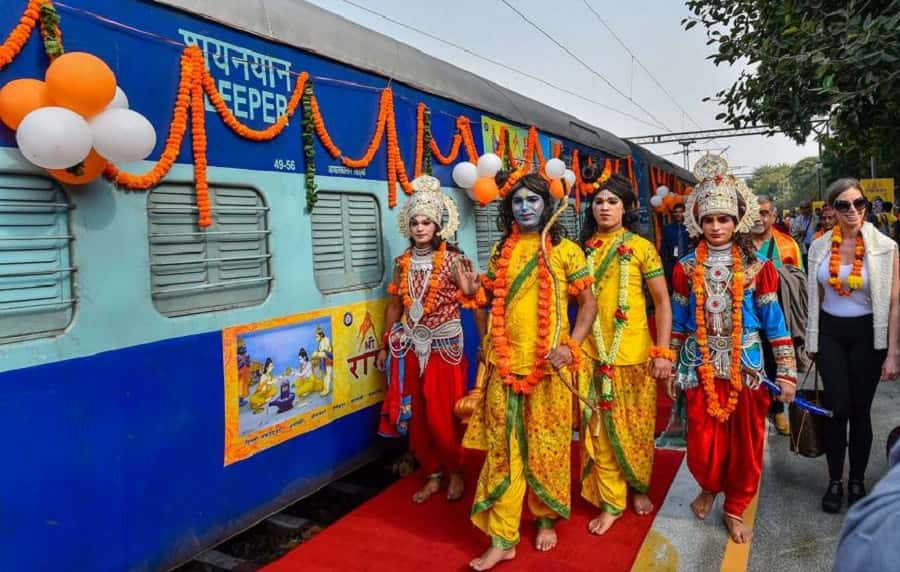 Lord Ram, an incarnation of Lord Vishnu, is an iconic hero and a vital part of the Hindu mythology. It was he who with the help of Laxman and an army of other beings had rescued his wife Sita from the evil clutches of Ravan who was residing in the island nation of Sri Lanka. He is worshipped across the entire Indian sub-continent and has a strict set of followers. Lord Ram has many temples in his name that marks some relevance or the other during his life and times.

Destinations Covered During the Indian Phase of Shri Ramayana Express:

The origination point of this train is from the pink city, Jaipur, which will be scheduled for 10 am in the morning. It will then be entering the capital city of Delhi and then later on Lucknow. Your first pilgrimage destination will be Ayodhya and after covering all the holy destinations the train will conclude its journey at Jaipur, but you also have the option to de board at Lucknow, Moradabad, Delhi, Alwar and Bareilly. 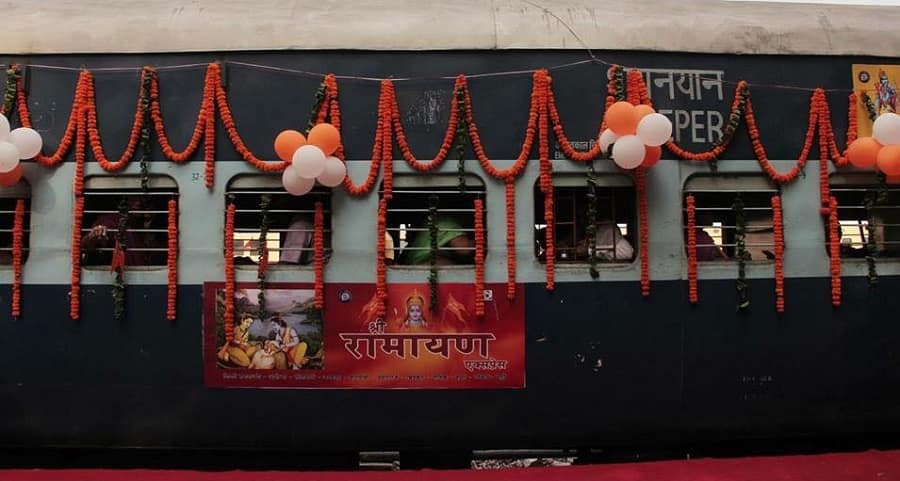 Here is some information about the destinations that you will be covering:

Sri Lankan Leg of the Tour:

If you opt for a package included with Sri Lanka you will be made to board the flight from Chennai to Sri Lanka and you will be covering some other legendary places like Colombo, Kandy and Nuwara Eliya.

Places in India for Adventure Experiences with Family

Are you looking for a trip where your family can join you in performing some adventurous activities? If yes, then scroll down the page to check some of the most enriching and exciting destinations. Explore any of these places where you can spend some amazing time with your family and friends to rejuvenate your body […]

However, monsoon is not much recommended by the travelers yet there is a unique and amazing charm of spending vacations during the downpour. Spending holidays during the monsoon season especially in India is surely going to give you a lifetime experience. This is the time when the mountains and the hills get covered with the […]

The month of September in India marks the commencement of the pleasant monsoon season in India. It is frequented with cool breeze and some refreshing showers that help in providing relief to the local population of India after some months of scorching summer heat. However, some places become inaccessible for visit while others are restored […]

Holidays to the Maldives