With the Mughal Emperors having had it as their residence for many years, the city of Old Delhi houses the world famous monument Red Fort. Built by Shah Jahan, the Mughal Emperor in the 17th century, it was the Mughal capital till the year 1857, and today is a World Heritage Site, endorsed by the UNESCO. The locals here know the story of how this monument took more than 10 years to complete. Earlier it was known as the “Quila-i-Mubarak” which also means the fort that is blessed. Mughal architecture is at its best here and the aesthetic value of the place is enhanced by the periodic changes that have been made to the fort for its upkeep. Earlier a cantonment, the Indian Army was in charge of this fort till as recently as 2003. Today The Red Fort is one of the major tourist attractions in India. 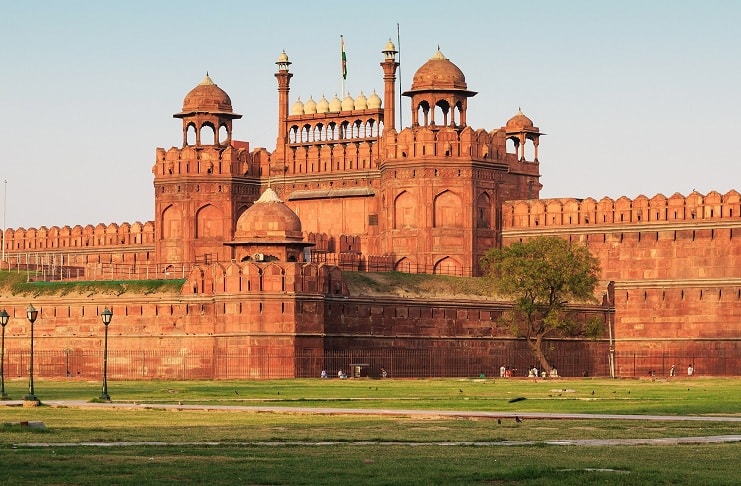 Initially, this majestic fort was the main palace in the city of Shahjahanabad which was the original capital of Shah Jahan. The erstwhile Mughal Emperor had shifted to Shahjahanabad from Agra, to be able to rule better from here. With the River Yamuna flowing along this fort has moats surrounding it and the Salimgarh Fort on its Northeastern side.

Asmin, a local freelance writer has aptly referred to this fort as a nostalgic site of Indian history. She goes on to say how this fort was under the supervision of the Sikhs for a brief period and how they took over the Diwan-I-Am, under the leadership of Sardar Baghel Singh Dhaliwal and Baba Jassa Singh Ahluwalia.

History books teach children how Bahadur Shah II Zafar was the last Mughal emperor and how this fort has witnessed this and also the Sepoy Mutiny of 1857. History reveals how the emperor was imprisoned by the British and brought back to the same fort. A year later, Bahadur Shah was exiled.

A tourist who has been to the Red Fort was heard expressing his awe at the ornamental work in the fort. With the best kind of art from India, Europe and Persia, the fort is a result of extremely intricate art of the Shahjahani style. He says that the richness of the work here and the lovely expressions makes it an important symbol of the Mughal architecture and the overpowering power they had.

And this is true for as one goes around the fort, one can see the beautifully dressed walls decorated with a very intricately handled upper part. The Delhi and the Lahore gates are the two main gates here and the locals ensure that the Lahore Gate is the main one as they occupy the outskirts of this gate on the main bazar road. This main bazaar is the very famous Chandni Chowk of Delhi. There is a division seen here which was earlier the main dividing barrier between the palace and the main fort with its military capacity. AT the end of the Chandni Chowk on the southern side is the other gate the Delhi gate.

Anyone who knows about Mughal architecture and history would certainly identify with the Diwan -I – Aam, which is the main platform for the subjects. This intricately constructed area has a Jharokha or a gallery kind of structure which was especially for the Mughal Emperor. This throne separated the Emperor from the public and was while, gold and silver in Colour.

If the Diwan-I-Aam is the place for the subjects, then the Diwan-i-Khas is a lovely marble structure with beautifully carved pillars. The floral patterns and the stones fixed here are a feast for the tourist. There are many adjustments made here to keep up the structure intact but the basic construction pattern has not changed.

It is worthwhile looking at the Nahr-I-Behisht which also means the “Stream of Paradise”. There are a line of apartments on a row of pavilions. These pavilions are called the Nahr-i-Bisht. With the water from the River Yamuna being used for creating a connecting channel for the pavilions, this place resembles a paradise on earth.

As a local rightly said, “There is a tablet here which reads that if there is a paradise on earth it is here and only here. Though the structure is predominantly Mughal, yet there is a lot of Hindu influence seen in the construction.

Any construction pertaining to Mughal architecture certainly has the women’s quarters in focus. So the Zenana in the Red Fort is no surprise but the decoration and the work found here surely is. With the present day museum here which was the Mumtaz Mahal earlier and with an extravagantly built Rang Mahal, the Zenana is famous amongst tourists for its intricately carved and decorated ceiling and the very beautiful pool of marble. Here again the Nahr-i-Bisht is the source of the water in the pool. Thus the entire place is interwoven and interconnected.

In one of the programmes in a student seminar, there was a short film on the Red Fort wherein a lot of understanding of the work of art here was discussed. One would surely understand it when one comes here. The Moti Masjid which was a private mosque for Emperor Aurangzeb with its three domed structure comes across as one such work of art with its stupendously carved marble layers. Overlooking a courtyard, it has a screen with three arches.

Also the Hayat Baksh Bagh was discussed where in the intelligently constructed garden with water channels cutting across it was highlighted. And rightly so as this garden which was a work of marvel in 1842, and supervised by Bahadur Shah Zafar is a beautiful construction in the middle of the pool created when the two water channels intersect.

Thus it is a pride for India that if there is any destination that is a must see in Indian tourism, then the Red Fort surely is one of the most important and one which is immensely popular. Besides, any Indian would know that this is the place from where the Indian Prime Minister gives his speech to the nation on the occasion of the Independence Day.

Mustafa a local vendor in Chandni Chowk when asked said that this is a place where more than 3000 people resided. But the 1857 Revolt, resulted in the British army taking over the place thus rendering the residences ransacked. He also told about the story of the trial of three officers here in this fort. Today at 79, Mustafa remembers how the Indian Army took charge of the fort after India got independence in 1947 and how today Indian Government has surely given it a tourist status.

With its descriptive light and sound show which showcases Mughal rule vividly, and with its amazingly fascinating structures within, the fort comes across as a sure pleasure for the tourist and educative for a student. Sad, that today there are also many miscreants who also spoil the place by stealing the marble flowers and certain other things from here. Though the Hamam and the mosque is not a place which can be visited, yet we could get glimpses of the place through the windows. A tourist coming here also would not be very comfortable with the walkways which sometimes wobble but apart from this there is not any great setback.

This is a place where the tourist can come, enjoy the past history and also shop for articles of unique value. There are crafts stores here which sell jewellery and other handicrafts. An artist could go have a look at the Museum of “Blood Paintings.” Here there is an exhibition on the martyrdom of our Indian freedom fighters and other heroes who have laid down their life for the country. A war museum and another museum of archaeology satisfy the tourist’s curiosity.

Innumerable events of the past coupled with recent terrorist attacks here, haven’t discouraged tourists from going to this magnificent monument which also is the largest in Old Delhi. It only goes to prove that men may come and men may go, but history goes on forever.

Thus with all its grandeur, saga and past tales, the Red Fort is a testimony to the past history and present tourism. Any person coming here would have a lot to take back and more to learn. It is a never ending area of learning, experience and nostalgia. Standing tall as an imposing edifice, the Red Fort is a proof of earlier form of art, architecture and magnificence.

Delhi is finally rising up to the vast potential of Heritage Tourism. Besides a number of tourism icons such as Red Fort, Humayun Tomb, and Qutub Minar, there are as many as 800 Havelis in the busy and labyrinthine lanes of Chandni Chowk that have escaped the eyes of government officials until now and yet […]

Delhi is a place of wonderful attractions and this capital city of the country makes the tourist spellbound and it is really a nice experience to be in this wonderful city of excellence in heritage. Delhi is one of the cities in the continuous existence since the millenniums and it is the place where the […]