An Introduction to the Wonders at Mahabalipuram

Mahabalipuram, also known as Mamallapuram, is a UNESCO World Heritage site. It has some of the world’s best Bas-reliefs, Cave Temples and stone-sculpted temples. But visiting the world heritage site is not the only thing you should do at Mahabalipuram.

Mahabalipuram was the port city of the Pallava kings. It gained prominence between the 7th and 9th century. Granite is available in great abundance. So it was natural that sculptors and architects got into their act. They, of course, had the royal blessings of two of the most powerful kings of the Pallava dynasty, Narasimhavarman and Rajasimhavarman.

Where Exactly is Mahabalipuram?

Mahabalipuram is in the state of Tamilnadu in India. Located on the Coromandel Coast overlooking the Bay of Bengal, it is just 55 km from Chennai (Madras) and about 340 km from Bangalore. It is very easily accessible by road.

See the world famous Shore Temple – from the shore 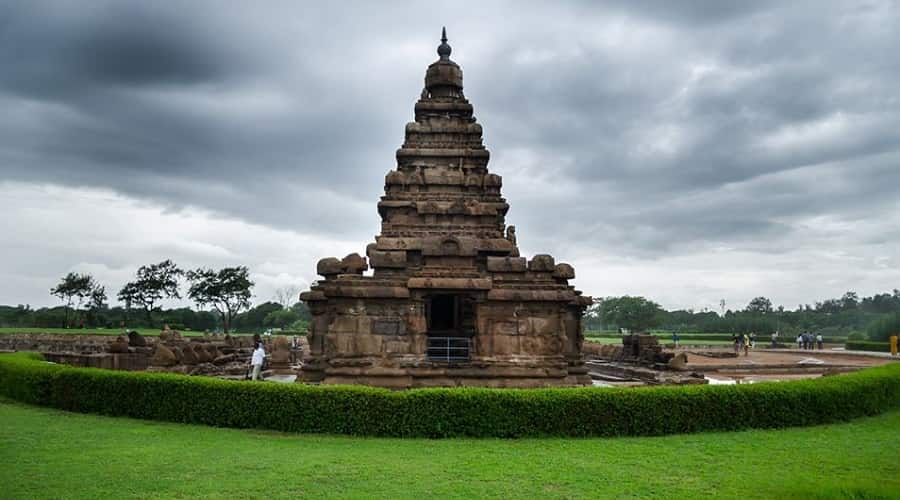 This is one of the oldest temples on South India. It is built with blocks of granite stone. The presiding deity is Shiva, but there is also a remarkable statue of reclining Vishnu. Unfortunately, the doors are locked so you can only peep inside and imagine. The best view of the shore temple is from the sea. So, this is what I recommend: get up early morning and walk on the sea shore towards the temple. You can see the temple from far jutting into the sea. This temple is rumoured (and perhaps is correct as proved by the recent archaeological survey) to be part of 7 temples, six of which have been swallowed by the Bay of Bengal. As you see the temple from the shore, you fear for its existence. It seems as a matter of time when the sea claims this last one too.

Don’t leave the shore yet

I watched this fisherman struggle with the waves for about 15 minutes before he could successfully negotiate the rough sea to go fishing. The main catch in this sea is crab.

You can also see the Shore Temple from the land

The bull figures all around the temple indicates that this is a Shiva temple. From a distance the temple seems ordinary (except for its location). The grandeur of the temple is apparent as you approach the temple. Like most of the south Indian temples, this too is a temple complex. The smaller temple that you can see in the photograph is a Vishnu temple.

The temple can overwhelm you. But let that not detract you from focusing on the smaller, but equally beautiful, artifacts. For instance this small panel in the photograph. This is also the first introduction of bigger Bas-reliefs to follow. God is in details 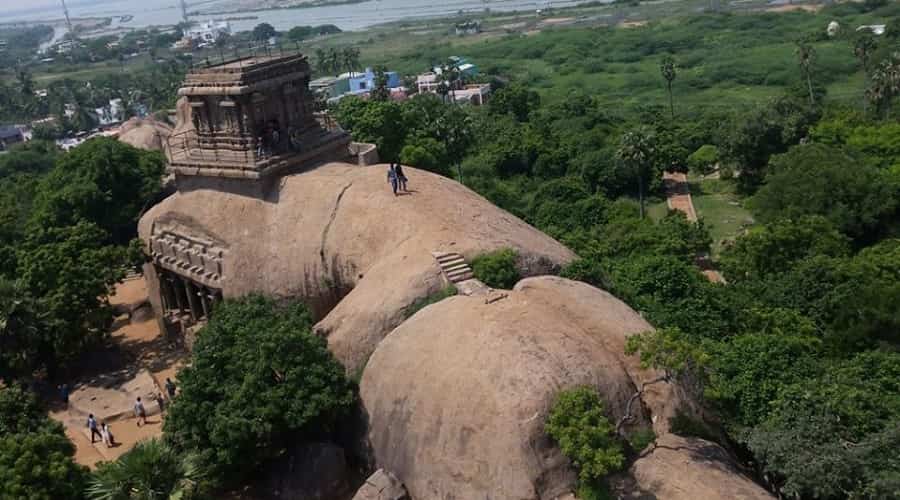 Neat! A granite temple on top of a small hillock …

This is just above the Mahishasuramardhini Cave Temple.

Enter the Cave Temple to See the Legend Come Alive

Mahishasura was a demon who had terrorized the universe. He had a boon that he cannot killed by anyone other than a woman. He thought he was more powerful than the ladies (he was obviously not married!) 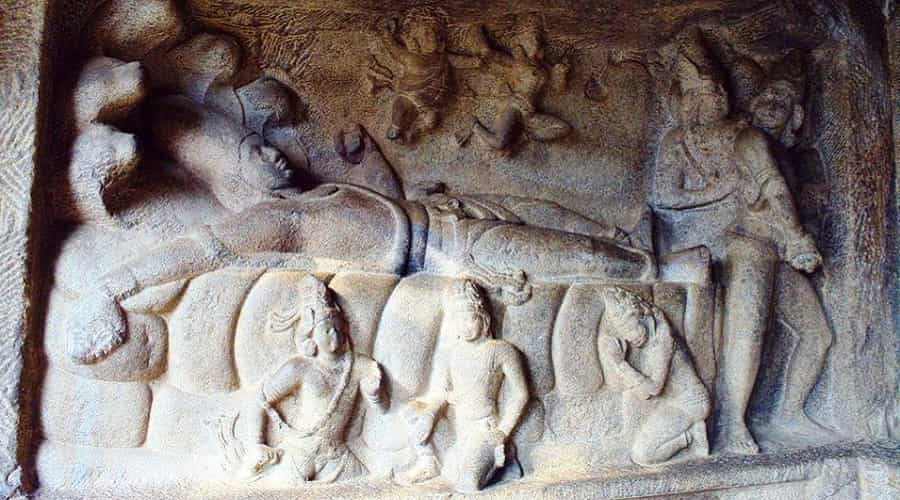 So Durga, an avatar of Parvathi – the consort of Shiva, went ahead (in the picture seen riding the lion) and killed the demon.

The buffalo-headed character is Mahishasura and you can see Durga just about to slay the demon.

Mahisha, in Sanskrit, means buffalo. Mardhini means destroyer. Asura is the demon (not exactly – but it is too complicated to explain the history of Aryan domination of the south). So Mahisha-asura-mardhini, would mean the destroyer of Mahisha, the demon.

And then Some Rock Climbing

On to the Panch Rathas 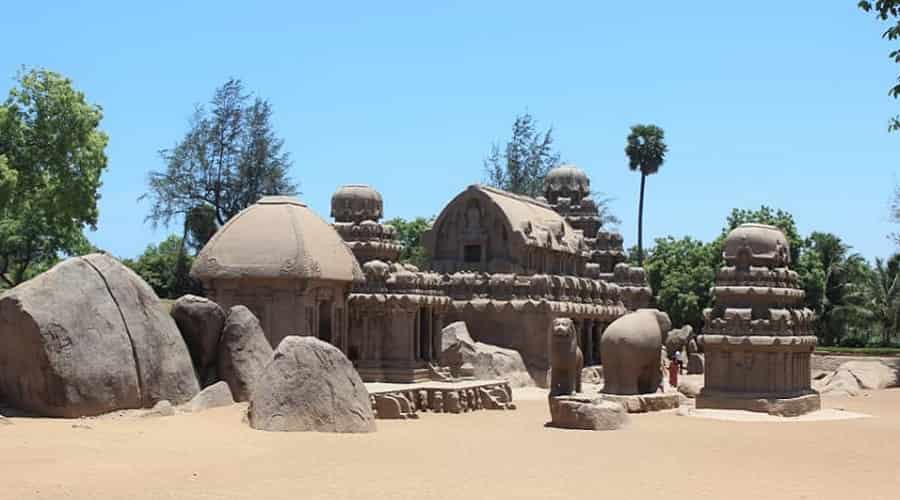 The 5 temples resemble wooden chariots. Since these are 5 in number and Pandavas (the heroes of Mahabharata) were also 5 these are called the Panch Rathas of the Pandavas.

Of these 4 temples are carved out of a single boulder of granite. You can still see the block that was left untouched. Sort of unfinished symphony.

Close your eyes and imagine a huge block of granite. Then imagine 4 carved out temples from that rock. Now see the picture once more.

The biggest bas-relief in the world. The artists have cleverly used the natural cleft in the rock to depict the Ganges. One can see the river creatures (snakes) swimming in the river. The man with ribs showing is Arjuna, the third Pandava. He has undertaken a penance to please lord Shiva to obtain Shiva’s mighty weapon, the Pashupatastra. 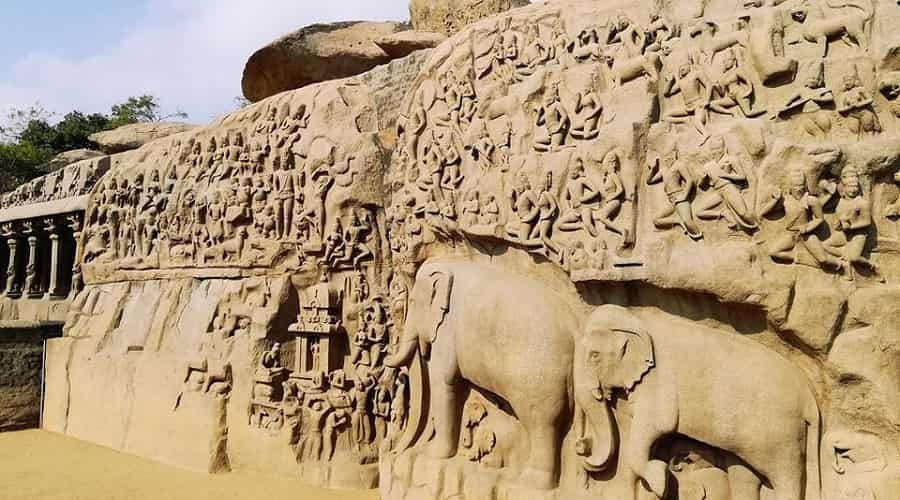 The bas-relief seems incomplete. See the picture. On the bottom left there are no carvings. Why? Did they lose interest? No more funds? Or do they depict caves from which animals look out? No one seems to know.

Can’t get Enough of the Aruna’s Penance

Stay awhile at the Aruna’s Penance. See the details of Arjuna deep in worship. Standing on one leg with hands raised upwards, Arjuna has reduced himself to a skeleton. The gods are not easily pleased.

Where there are men there will be monkeys

These monkeys are oblivious of Arjuna and his effort. While one grooms the other and hunts for lice, the baby monkey plays on his mother’s lap. 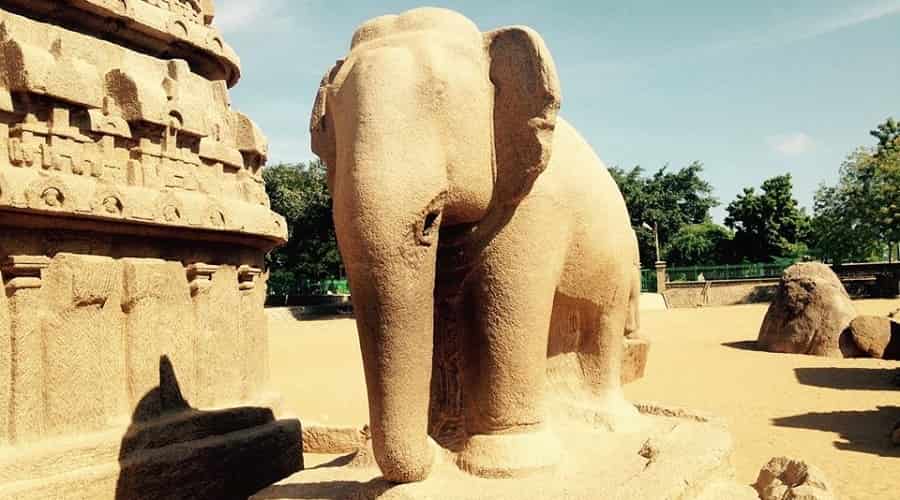 Grand and lovely. I love the elephants. And the baby elephants. You could stay at the Arjuna’s penance for ever looking at the various animals and demi-gods and men that have sprung out of the rock because of the artists imagination.

Tired? Go back to the GRT Temple Bay Resort. 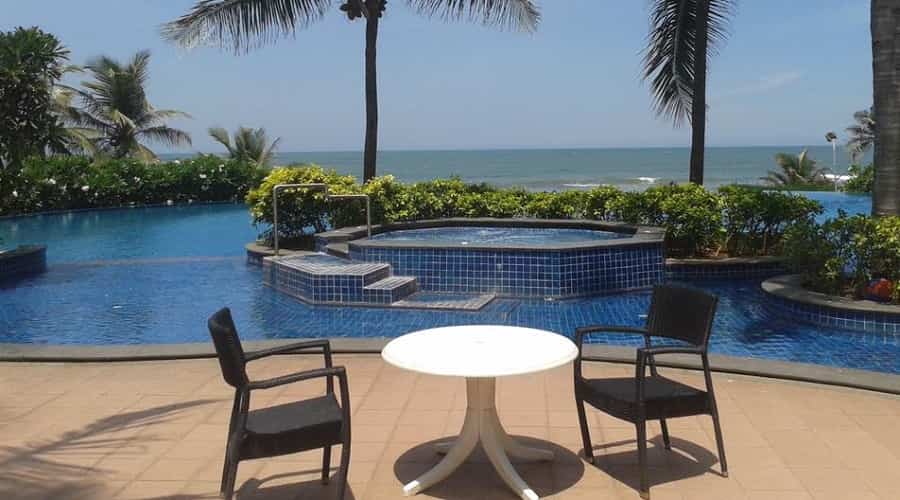 GRT Temple Bay Resort is a wonderful place to stay. Mahabalipuram has only two seasons – (i) Hot and (ii) Very Hot. The meandering swimming pool is a welcome relief after the seeing the tourist attractions.

And in the Evening … 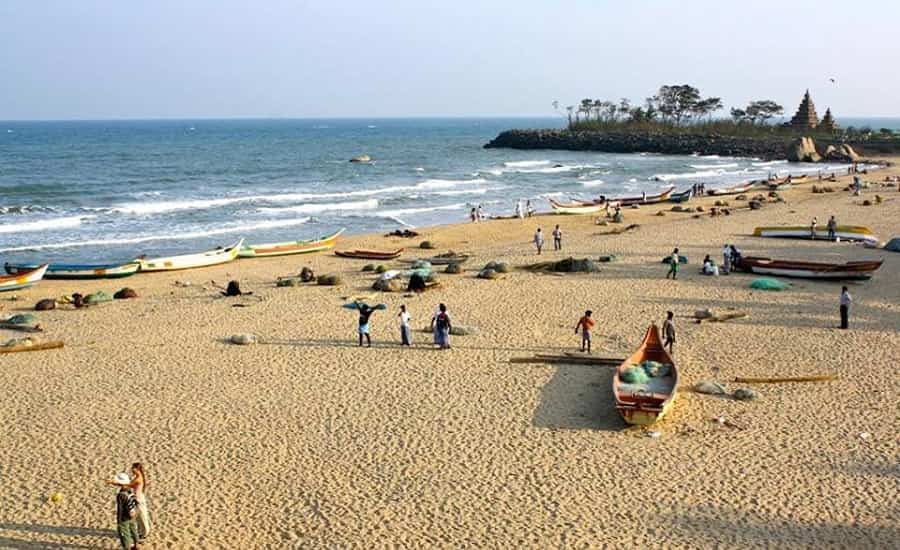 Go back to beach. The sea is very rough, so do not venture in deep. But you can always enjoy yourself near the shore.

Time to Go to Bed

Tastefully decorated, with traditional silk cloth paneling the room is just perfect for the night snooze. Set the alarm, to rise early. You need to hit the beach before the sunrise, no?

There is a lot more than textiles to experience at Coimbatore, Tamilnadu second largest city, a huge cotton production centre & textile hub. The city is aptly known by the sobriquet as Manchester of South India. Fun Fact – Coimbatore supplies about two thirds of India’s requirement of motors and pumps. Historically, Coimbatore was the […]

The irresistible glimmering beaches, magnificent historical attractions, gorgeous azure waters make Mahabalipuram one of the most ultimate destinations. This charming coastal town is adorned with centuries old stone carved heritage sites, and is one of the most preferred halt for those who come from Puducherry and Chennai. The streets of Mahabalipuram is dotted with various […]

Get to Know About Convenient and Affordable Hotels in Nagercoil

The hotels in Nagercoil are there to simply enhance your city’s trip experience. Although, they are less in number, but they are no less in offering comfortable-content stay to every guest, and that too at low price. A beautiful sprawling city in the state southernmost state of Tamil Nadu, named after the deity of the […]