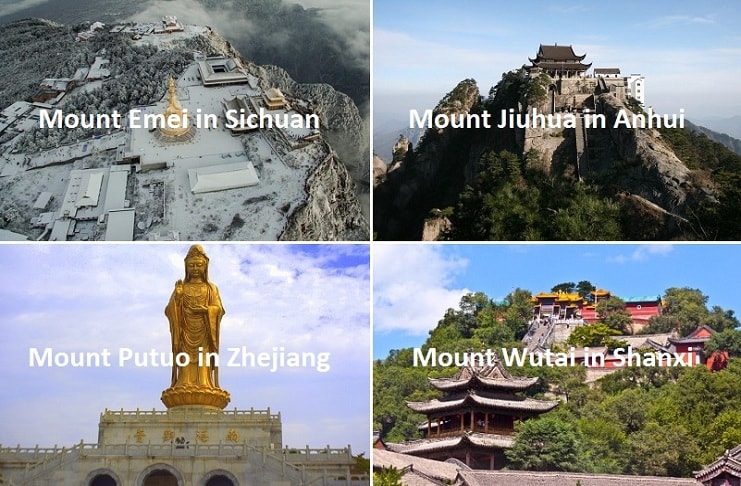 Han Buddhism has Mt. Emei, Mt. Wutai, Mt. Jiuhua and Mt. Pluto as the Four Sacred Mountains. Legend has it that these four mountains are the enlightenment locales of the Bodhisattvas Wenshu, Guanyin, Puxian and Dizang. These four sacred Buddhist Mountains are very popular for their libraries storing Buddhist books, cultural antiques and the other forms of scenic beauty and Buddhist architectures.

Mt. Wutai is located in the Shanxi Province of the County of Wutai and is one of the five major Buddhist pilgrimage sites in the entire world. The other four Buddhist pilgrim spots are Kushinagar in India, Lumbini in Nepal, Bodhgaya and Mrgadava in India again. Wutai is a place that is especially dedicated to the Bodhisattva of wisdom which is called Wenshu in Chinese. It was around 67AD that Mount Wutai became very popular. Today it has more than 50 temples and the most popular ones here are the Tayuan temple, Xiantong temple, Foguang temple and Pusading temple.

The Xiantong Temple is one of the oldest Chinese temples and is the first destination for all pilgrims who come to this part of the world. The Sarira Stupa, the great White Pagoda, the Tayuan Temple are all major landmarks here in this part of Mt. Wutai. Bodhisattva summit is the most important and also the largest temple of Tibetan Buddhism on the Mt. Wutai.

Mt. Emei is another of the sacred Buddhist Mountains in China and is located around 160 kilometers to the south-western part of Chengdu in the province of Sichuan. In the year 1996, Mt. Emei was declared a UNESCO World Heritage and Cultural Heritage Site. Along with this, the Leshan Giant Buddha which is supposed to be the largest stone carved Buddha structure in the world was also declared a Heritage structure. The construction of such temples of Buddhism in this region began in the 2nd century and then by 15th century it had reached its zenith. There are around 30 temples here today on the Mt. Emei and this is inclusive of the popular Wannian and the Baoguo temples.

The Baoguo Temple is today the best maintained and also the most ancient temple in the Mt. Emei. It has two famous treasures of a bronze bell and a Buddhist statue. The Buddhist statue is around 2.4 metres tall and the bronze bell is around 2.3 meters tall and weighs 25 tons. This is in fact one of the most important temples in Mt. Emei and was constructed in 420. The temple has witnessed and withstood 18 earthquakes in a span of 4 centuries. The Golden Summit of Emei is very famous here lying around 3,079 meters above the sea level. It has all the best features of an ideal mountain and has a sea of clouds and also sacred lamps and an auspicious halo.

Then there is Mt Putuo which is another fascinating temple in the Zhoushan Islands. It is around 100 nautical miles to the east of Hangzhou Bay in the province of Zhejiang. There are three important temples on Puto. One is the Huiji then the Fayu and then Puji. The Puji temple has a very ancient structure the Yuan Dynasty Duabao which is also called Abundant Treasures Pagoda. There is a stone stele in the Fayu Temple from the rule of Wanli in the Ming Dynasty. It has a Bodhisattva image carved and shows a Bodhisattva Guanyin holding a willow twig in her hand. The temple also has the Nine Dragon Hall which is an exact image of the predecessor of the Ming Imperial palace in Nanjing. There is a ceiling which has beautifully carved nine dragons and they reveal the true workmanship of the ancient kind of ornamental architecture.

Then there is Mt. Jiuhua another Buddhist mountain which is situated in the city of Chenzhou in the southern part of the River Yangtze in the province of Anhui. Mt. Jiuhua has more than 70 peaks and half of these peaks are seen rising over a height of around 1000 metres. The highest is around 1342 metres. It has lovely waterfalls, magnificent valleys and fascinating streams. The mountain is shaped like a lotus and is famous for the scenic beauty. Huacheng temple is the most important temple here on and this is a structure that was built in the Jin dynasty. The Baisui Palace is found here a little to the east of Jiuhua Street. Built on a very steep cliff in the local patterns, this is a temple that is worth seeing on tours to China. Then you have the Zhiyuan temple which is a lovely maze of palatial roofs and steep cliffs. The very majestic Dongya temple is found here and today has the Anhui province Buddhism Seminary.

Thus temple pleasures are enthralling in the beautiful land of China so come and visit these Buddhist temples which have been here since ages.

You Will Admire the Yonghe Gong Temple

Known as the Palace of Peace and Harmony Lama Temple, the Yonghe Gong Lamasery is a temple in the northeast of the China’s capital city Beijing and is dedicated to the Tibetan Buddhism. Deserving your visit, the temple is a well preserved religious monastery and among the largest of its kind on Earth. Holding 17th-century […]

When planning a trip to China, preparation is important as you are not only leaving the country, you have to follow China’s guidelines for entry and touring the countryside and cities. Not only do you have to know what paperwork to take, you should know the best times of the year to take the holiday. […]

5 Striking Sights to Visit around Milan