Fiddleheads look like the scrolled handle on a violin head and are actually the sprouts of the ostrich fern, harvested just as they are doting through in the ground in early spring. These sprouts – coils about one and a half inches in diameter and about two inches long – are harvested within two weeks, after which they unfurl into the fern plant. Fiddleheads are some of Canada’s very rare indigenous vegetables, and one of my favourite and the most obvious signs of the onset of spring, and summer to come. 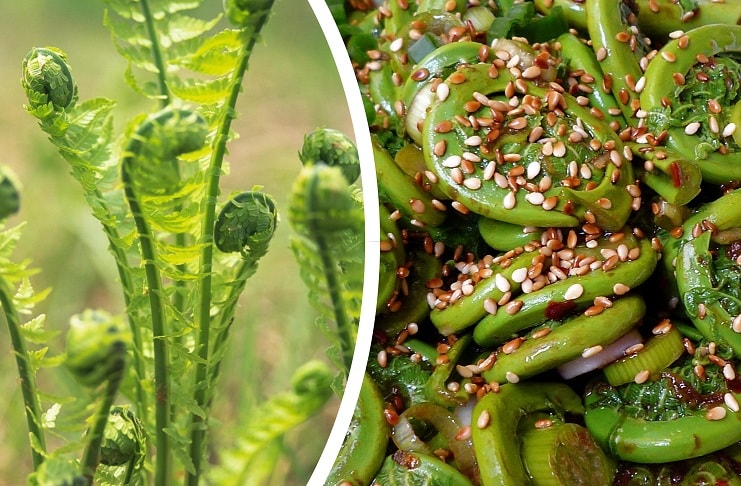 To me, the taste of fiddleheads is something like a blend between broccoli and asparagus, with a little bit of a nutty or woodsy flavour. They are extremely delectable and crunchy to taste, with that ‘fresh greens’ sensation, steamed and topped with a bit of lemon juice and butter, or in stir-fries or cheesy casseroles.

Pair up fiddleheads with some other uniquely Canadian fare from The Recipe for Travel’s Canadian Recipes.

A few quick tips for preparing fiddleheads for cooking:

Fresh fiddleheads can be found in your local grocery store and farmers’ markets April through early June, depending on where you live. Look for firm, tightly-coiled, bright looking fiddleheads.

Better yet, use some right away and store some for winter:

Are There Toxins in Fiddleheads?

According to the Canadian Food Inspection Agency (CFIA), fresh fiddleheads contain some natural toxin which is present in the fern of the plant that could be the cause of some reported cases of ‘food poisoning’ symptoms experienced after eating raw or undercooked fiddleheads.

I’ve actually seen several write-ups about fiddleheads – each one different in its recommendation about whether or not fiddleheads can be consumed raw. I love them cooked, and find that they retain their crunch and woodsy flavour even when well-boiled and then cooked further in a cheese and veggie casserole – that said, and with government food safety agencies recommending against eating fiddleheads raw, why would anyone risk it?

Do you have a recipe for fiddleheads? Share it with us in the comments below!

Vancouver is a big city with an interesting history and a good range of restaurants and bars, that will keep a tourist busy for several days, but it is also in a fantastic location if you are interested in wildlife viewing. Whale watching is possible in a half day trip from Vancouver and Vancouver Island […]

Relax Surrounded by Pristine Tropical Beauty with a Maldives Holiday

Visa on Arrival for Indians