Ta-Prohm (ancestor Brahma) refers to temple at Angkor in Cambodia built mostly in the 12th and 13th centuries. Initially named as the Raja Vihara (Monastery of the King) built in the Bayon style, the sacred Buddhist temple is just at a km east of Angkor Thom. The temple was discovered by the Khmer King Jayavarman VII and dedicated it to his mother. What makes this temple unique from the Angkorian temples is that Angkor-Ta-Prohm is still in the same state in which it was ascertained. Further, the camera-friendly trees emerging around the ruins and the forest setting allure thousands of visitors annually. 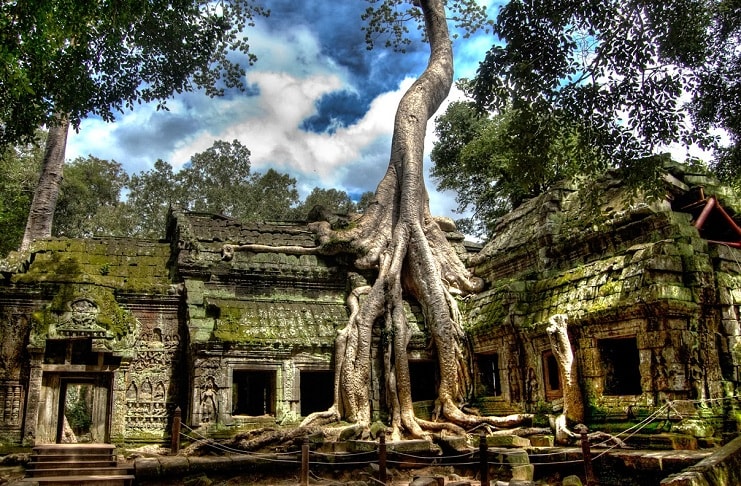 The stele at the Angkor-Ta-Prohm says that the place was once inhabited by over 12,500 people that included 18 high priests and 615 dancers along with extra 80,000 folks in the nearby settlements employed for services. Further, according to the steel, the temple also hold reasonable amount of riches – gold, pearls, and silks.

Angkor-Ta-Prohm is a typically flat Khmer temple with five rectangular walls enclosing a central sanctuary. Its typical feature is that it is slanting to the east to hold up the temple proper to the west along an east-west axis. Its external wall surrounds a huge area that once could be the settlement area, but is today wooded. Entrance gopuram at each prime point are worth noting even though one can access the temple only from the east and west. Face towers were a later addition to the gopurams in the 13th century. However, some have crumbled today.

Total 39 towers at the temple today are linked with several galleries. In the temple proper, the three internal enclosures hold galleries wherein the first enclosure’s corner towers make a quincunx with the middle sanctuary tower. Among all the monuments here, the most remarkable ones are the libraries in the first and third enclosures in their southeast sides, the satellite temples in the third enclosure at its north and south, the Hall of Dancers stuck amid the third and fourth east gopuras, and a House of Fire in the fourth eastern gopuram.

Today, the temple boasts only a handful of informative bas-reliefs. One reason for this could be that most Buddhist artwork might have been damaged after the death of Jayavarman VII by the Hindu icons. Among the leftovers, scenes of Buddhist mythology can be seen even today. A famous bas-relief here exemplifies the Great Departure of Siddhartha from his father’s palace, who then achieved enlightenment to be called as Buddha. Currently, you can also visit stone reliefs of devatas (female deities), contemplating ascetics, and dvarapalas, the guardians of the temple.

The growing trees from and around the ruins is something unique to the Buddhist temple of Ta Prohm and captivating to the tourists. Among them, two species are in majority, the bigger is the silk-cotton tree (Ceiba pentandra) or thitpok Tetrameles nudiflora. On the other hand, the smaller is the strangler fig (Ficus Gibbosa) or Gold Apple (Diospyros Decandra).

The temple is located in the Angkor Archaeological Park that has its entrance fees as $20 for one day, $40 for three days, and $60 for a week.

Phnom Penh!!! Yes, this city is often taken for granted by travelers heading to Cambodia. Many travelers skipped this part of town and head straight to Siem Reap where the Angkor Wat is situated. Phnom Penh is the largest capital in Cambodia so give this city a chance as this is where you can learn […]

In the south of Cambodia, there are lovely long stretches of coastline, with a selection of beautiful beaches for visitors to enjoy. More and more visitors are beginning to venture to the relatively untamed and raw beauty of the beaches in Cambodia. There are also several islands, which are fairly quiet and secluded. There are […]

Come to the land of culture, tradition and Buddhist principles. Come to the kingdom of Cambodia. This is one land which will surely give you all the pleasures of being in a land of the most fascinating Buddhist experiences. If you want to explore the Buddhist sites in the reign of Cambodia then surely it […]

Insure Yourself While You Travel – Travel Insurance Web

What Can You Shop For In Beijing