When you mention Bangkok to a backpacker, their mind conjures up memories of peeling bed sheets from their backs, as they try to move closer to the cooling air of the ceiling fan. Hour upon hour spent melting while they listen to the taunting click of the guest room fan. Let’s face it, for years Bangkok has been seen as a waiting room in Asia. A crossroad, you hole up in, while you plot your next adventure. A towering concrete jungle with little history and culture on show. Well they’re wrong. Bangkok is temple city. There are temples in Bangkok around every corner, full with rich architecture and friendly giant Buddha statues. The Temples in Bangkok on their own are enough to dispel this waiting room image.

So, to finally stamp out the embers of the waiting room label, here are some personal highlights from Temple City:

The best Temples in Bangkok: Wats on your to do list? 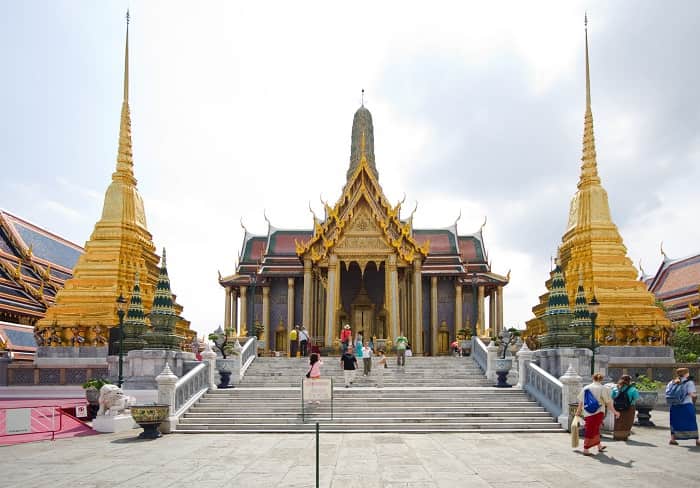 Located in the grand daddy of all tourist attractions in Bangkok (the Grand Palace), Wat Phra Kaew with its golden towers is almost as decadent as the grounds it finds itself in. I mean, what’s more decadent than a giant emerald Buddha. Not much. The Buddha itself has seen almost as much of South East Asia as most backpackers, having previously spent time in Luang Prabang and Chang Mai.

Note: The temple has a strict dress code and is considered one of the most religiously significant spots in Bangkok. 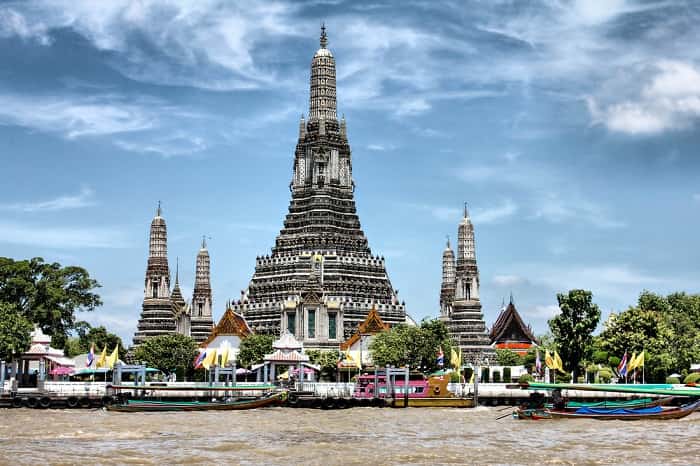 This may be one of the few temples that backpackers shake off their hangover to visit. Not because they are desperate to see it (well, there’s a bit of that), but because the best time to see it is at sunset. Multi layered in a Khmer style, it glistens in the Bangkok skyline as the amber sun sets on it. The scene will instantly make you want to visit the sacred Mount Meru on which the temple was based. This culturally rich, place of Buddhist worship, is easily one of the best temples in Bangkok. 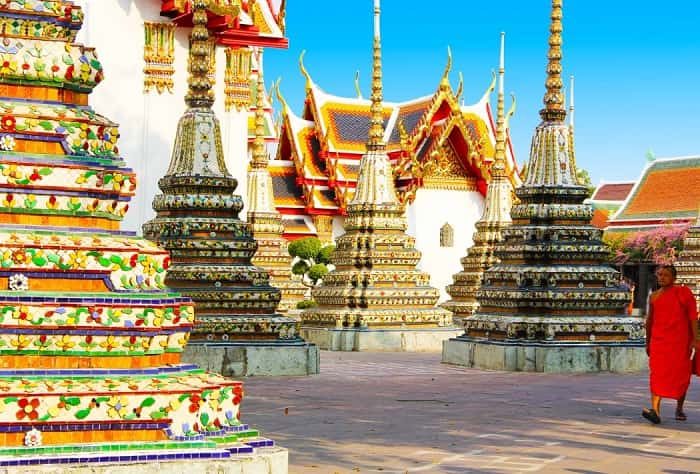 Temples in Bangkok tend to have a lot of giant Buddha’s in them. Most of them are standing or sitting up, looking jovial. But not too many of them are lying down. Well, Wat Pho has the luxury of being one of the few temples in Bangkok and the world that has a reclining Buddha. It’s located right next to the grand palace, so you may walk away with the impression that there is a Giant Buddha around every corner in Bangkok. 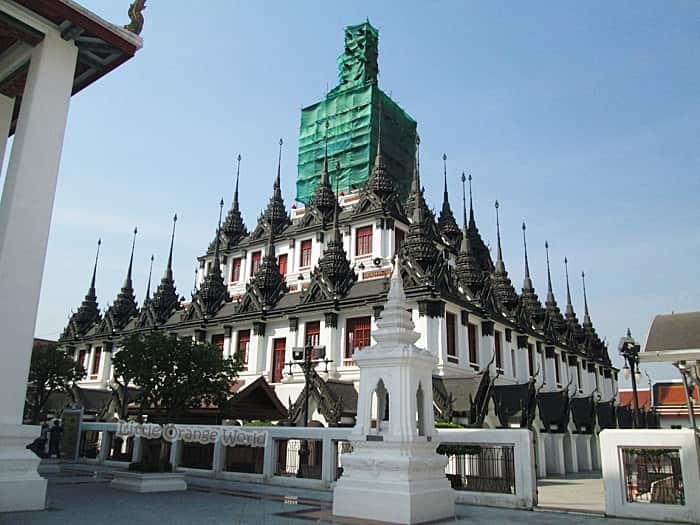 If you’re in the normal backpacking hub of Khao San Road and you’re particularly lazy, then Loha Prasat is the temple for you. Not too far from the Kao San Road, this metal lined temple will save you from aggressively negotiating with tuk tuk drivers. The only problem is that its multi levels means that you’ll probably need that driver for the way home. 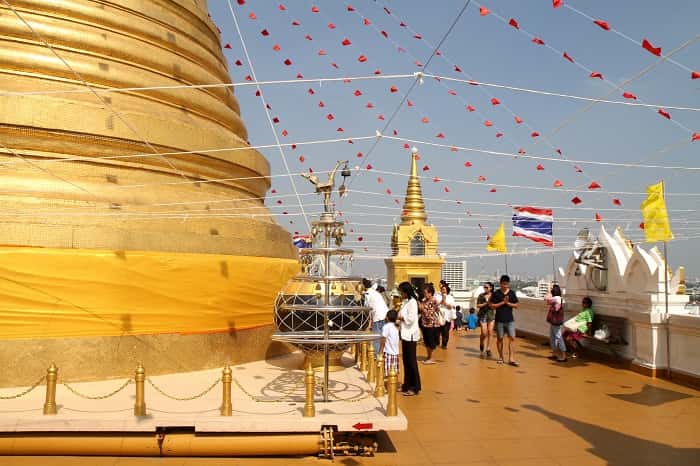 Of all the temples in Bangkok, Wat Saket probably has the most unstable history. No, not in that way, it was just structurally unsound. In fact the first attempt at building it resulted in it collapsing. Fed up of the massive flop and unable to negotiate the unstable ground, it remained half finished for a while. Thankfully, through sheer force of will, the temple was eventually completed and is now home to the golden chedi of Phu Khoo Thong’or. 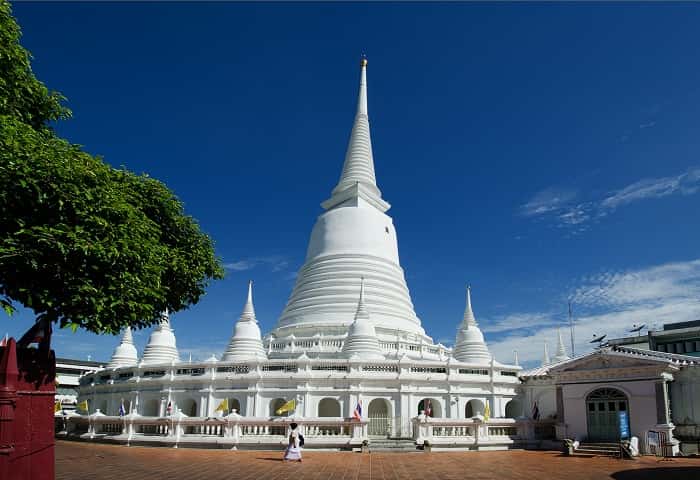 Depending on whether you are a history buff or not, you’ll either know this as ‘the temple that was built of King Rama the Thirds remains’ or if you are more like me ‘Turtle Temple’. No, it is not a temple dedicated to Turtles. The main building is built in the shape of a turtle shell and there’s a pond where you can feed the turtles. No wonder it is one of the most popular temples in Bangkok.

So there are few of the temples in Bangkok. To be honest the list could have stretched to about twenty. Bangkok is a neon lit, urban city with tight narrow streets. But, there are also pockets of space where you can find peace and introspection. The temples alone make Bangkok more than just Asia’s waiting room.

What are the reasons that Bangkok so appealing to those who are seeking perfect honeymoon location? Bangkok is the capital city of Thailand, located at the center of the country which makes it easy to come and go and to travel in beautiful Thailand. It’s been known to be one of the most touristic cities […]

Visa on Arrival allows passport holders of 19 countries to travel to Thailand if they meet the following requirements. Visa on arrival is strictly for touristic purposes. Must possess travel documents like return tickets, confirmed itinerary like hotel reservations etc. Proof of funds of 10,000 Thai Baht in case of one passenger and 20,000 Baht […]

Save Money on Your Holiday Planning Without Breaking a Sweat