Ban Gioc falls which is also known as Detian falls is a two waterfall divide located in Daxin County on the Chinese end and from the Vietnam side the district of Trung Khanh. Crossing the boundary situated between China and Vietnam the Ban Gioc waterfall joins the Banyue waterfall in Vietnam. 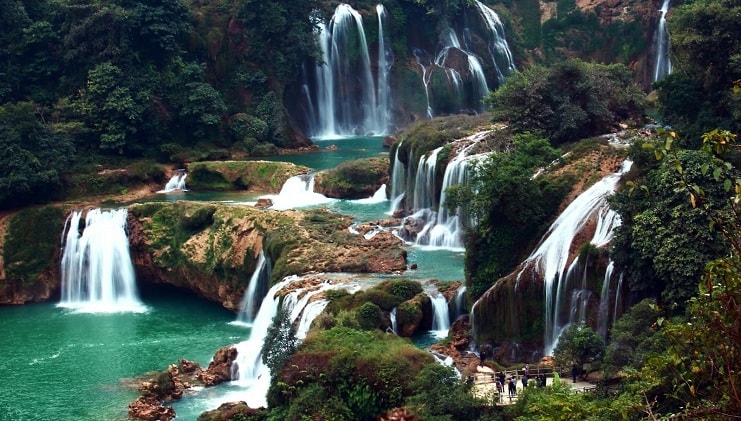 People flock to Cao Bang to visit the breath-taking Ban Gioc waterfall. Located about 80 kilometres to the North of Cao Bang, these majestic falls flows down from the Quy Xuan River which approximately measures 53 metres high and 300metres in wide. This combination of falls is also termed as the Detian and Banyue falls along the Vietnam and China boarder. Falling down carbon rocks, these falls forms a rainbow during sunny days from a reflection of sunlight from the water falling down the cliff. Option to visit the Ban Gioc waterfalls on foot is perhaps one of the best ways to explore and soak in the scenery and beauty of the falls during your travel in Vietnam.

It is the largest waterfall in the Asian continent and among the largest of waterfalls divided by a national boarder; Ban Gioc covers approximately 200 meters in width and an estimated elevation of 70 meters. Beneath this amazing fall is a deep and quiet pool covering an area of 200 meters in width and over 30 meters deep, its waters rushes down a triple stepped cliff and is divided into three sub-waterfalls by rocks and trees. The whirling sound of falling water is eventually swallowed by the dead silent pool downstream.

Seasonal Characteristics of the Waterfall

The waterfall’s scenery changes considerably in all the four seasons: spring, autumn, summer and winter. Each season brings about substantial change in appearance and the volume flow rate of water. Below is a detailed description of notable changes over the seasons.

Winter – There is much less rains and the water level drops considerably bringing about slow movement of water down the cliffs, thus the volumetric flow rate drops and there is less noticeable noise from the fall.

Summer – This season brings about additional volume of water, the level and the speed of flow rises. The flow is powerful and whirling sound can be heard from far distances, during this time, the waterfall scenery is covered by mist arising from fast falling waters.

Autumn – The region slightly changes in appearance as there is no much water to help the plantation surrounding the waterfall to blossom, the green vegetation turn colour from green to golden-yellow coloration, during this season, most physical characteristics are evident and this is best season to visit and survey the hidden features during other seasons.

Spring – During this season, the plantations around the waterfall begins to blossom and this is evident from the flowering of the plants, the blooming continues and this marks the beginning of a new cycle of seasonal changes to come along.

This unique characteristic of the Ban Gioc waterfall in the seasons makes it the most attractive site in Vietnam all the year round.

Vietnam is gaining its popularity as a top honeymoon destination. This exotic country is boasting with paradise-like places that cannot but attract the lovebirds during their best month in life. Except for palm trees and coconut cocktails, there are many honeymoon destinations in Vietnam that will attract unusual couples who like to hike, climb mountains […]