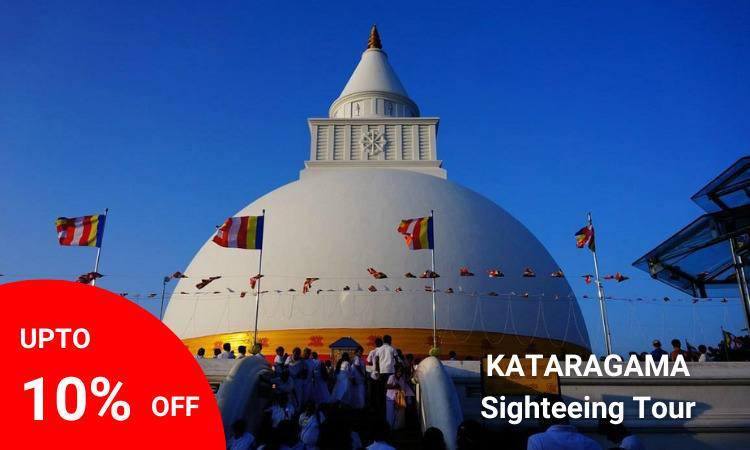 As many people say that Sri Lanka is one nature’s beauty but the country is also famous for harboring highly spiritual towns where people come to worship their deities. Kataragama is one such town which is famous for holding spiritual significance for religions like Buddhism, Hinduism, Muslims, and Vedda. The town attracts pilgrims in a great number from South India and they come here to celebrates the spirituality as the town celebrate in pure form.

With our one-day Kataragama City Sightseeing Tour from Nuwara Eliya, travel this spiritual town and awaken your soul towards what’s good in your life and lead towards a positive life.

The tour representative will pick you up from your hotel room in Nuwara Eliya and later, you will enjoy a road trip to Kataragama which is only 140 km away from Nuwara Eliya. On reaching Kataragama, you will walk a day full of spiritual places and some sights of picturesque nature trails.

Places you will Visit in Kataragama

Sella Kataragama is a highly venerated temple in Kataragama where two deities are worshipped – Buddhist God Kataragama Deviyo and Hindu God Murugan. Not only Buddhist and Hindu people come to worship this beautiful temple but Muslim and Vedda community people also come here to pray. Earlier, the temple was highly inaccessible because it is constructed in a jungle area but now, Sri Lankan authorities have made the path accessible to the pilgrims.

Kebiliththa Dewalaya is a spiritual site where Lord Kataragama used to live and is highly worshipped by the people of Sri Lanka. The temple is worshipped as a site of great divine aura and people come here to pray for a healthy and prosperous life. The path to this highly revered temple is still inaccessible but people with faith visit this temple following the difficult trail. The temple is also situated in the great jungle of Yala National Park so, you can understand the wilderness that this temple resides in.

Just outside of Kebiliththa Dewalaya, you will wander in the Yala National Park where many exotic species breathe life. Yala National Park is a huge jungle area bordering the Indian Ocean which is famous for its lagoons, grassland, and wildering forest cover. Many species like Leopards, crocodile, elephants, and hundreds of bird species can be spotted here. You can also book a safari tour of this park and can explore the wilderness of this national park.

You will visit another spiritual gem in Kataragama – Kiri Vehera which is an ancient stupa in Kataragama dating back to 6th century. The Buddhist community worship this stupa with great zest and spiritual fervor. And many believe that Buddha Shakyamuni also visited this spiritual place. The place also finds a beautiful correlation between the Buddhism and Hinduism because Buddha Shakyamuni and Lord Murugan facilitated their friendship at this place.

During lunch, you will visit the town’s popular eatery where you visit taste the famous Sri Lankan dishes and savor them to your soul.

A. Katargama is famous for a temple complex dedicated to the buddhist guardian deity called Kataragama. It is mainly famous for its religious sites.

Q.When should i plan a visit to Kataragama?

A. The best time to plan a visit to Kataragama is from mid May to April and July.

Q.When is the Kataragama festival?

A. The Kataragama festival will take place at 21st July 2022.

A. The Kataragam festival was built by the regional king Mahasena during the 6th century.

Q.Which are some must visit places in Kataragama?