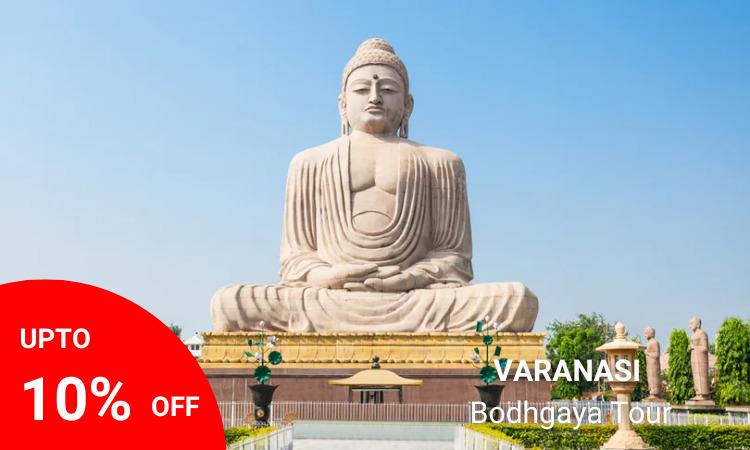 With our Varanasi Bodhgaya temple tour package of 5 days and 4 nights you will be able to take a dip in the treasure of spirituality which is held in India. You will be made to experience some of the most iconic and the holiest destinations which are flocked by pilgrims and devotees from all over the world.

Take a walk among this spiritual holy land which resonates deeply with the Indian culture.

Once you reach Varanasi our tour representative will meet you at your arrival point of either airport or a railway station and escort you to your allotted hotel where you will be duly checked in. You will be allowed to freshen up for a while before heading out in the evening for a soulful Ganga aarti. You will then be made to head back to your allotted hotel for an overnight.

Later on by afternoon, you will be taken on an excursion of Sarnath – the place where Gautam Buddha had given his first sermon after attaining enlightenment. While in Sarnath you will be covering places like – the Buddha temples, Dhamek stupa, Chaukhandi stupa and the Sarnath archeological museum. You will then be made to head back to your hotel in Varanasi for an overnight stay.

Finally, you will be made to head back to your hotel for an overnight stay.

After having your breakfast in the morning you will be transferred to Varanasi while stopping en route at Gaya. Once in Gaya, you will be taken for a brief sightseeing expedition where you will be covering places like – Sita Kund, Janki temple, Ram Chura and Falgu River.

Finally, you will be driven to Varanasi where upon arrival you will be immediately checked in to your hotel for an overnight stay.

After having your breakfast you will be escorted by our tour representative to your drop location of either the railway station or the airport. This will mark the end of your journey with us.

A. Varanasi is one of the oldest living cities in the world which is about 2500 years old.

A. Yes. Gaya is a small town near the town centre of bodh gaya.

A. Gaya is the place where Gautam Buddha had attained enlightenment.

Q.How many days are enough to explore Chitrakoot?

A. 2 days are enough to explore Chitrakoot.

Q.Is there an international airport at Lucknow?

A. Yes. Lucknow has an international airport called chaudhary charan singh airport which is also one of the largest airports of Uttar Pradesh.