Excavated from the Walbrook Street in London at the time of restoration work after the World War II, the Temple of Mithras is a Roman ruin dedicated to the Persian god of light and sun, whom many look as the real personality of the Christ. Its present site is not its original look; rather it was located underground as a cave wherein Mithras had slain the primeval bull releasing the powers of life and vision on the planet.

Acted as the foundation of the traditional Christian church holding long aisles to an altar and apse, the Temple of Mithras was shifted to its current site at Temple Court, Queen Victoria Street. 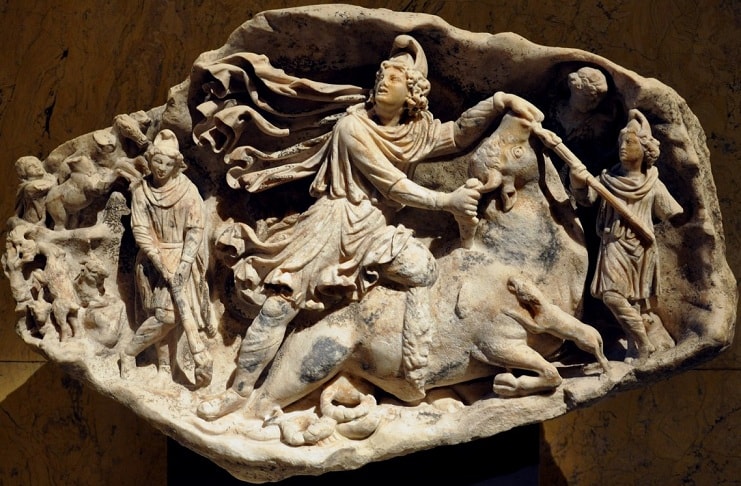 A local guide told me about this aspect of the Mithraic sect.

In the 2nd century A.D., Mithraism posed a severe challenge to Christianity in the Roman Empire with the only men sect in which those they were subject to terrible induction ceremonies. It stressed on guts, honesty, and moral behaviour and soon became a part of the Roman army.

According to the basic view of the Mithraic, a rock gave birth to Mithras and his early life was full of adversity and sufferings. Finally, he was compelled to fight against the primeval bull that he drew to the cave and slewed. This marked the freeing of his life force for the overall welfare of the mankind. It was from its body that all valuable plants and herbs grew on this planet. The blood acted as the source of vine and that its semen brought up many useful animals.

Due to the event of bull slay, sacrifices of bulls from the religious foundation and a common offering for Mithraic worship. Further, joint meals of bread and wine at the time of the celebration of Mithras’ emerging from the rock on 25th December became the tradition.

Typically, all the temples to Mithras were built underground either partly or completely to represent the cavern where Mithras slain the bull. Built somewhere in 240-50 A.D, this Temple of Mithras at London contained the portraits of Minerva, Bacchus, Mercury the guide of the souls of the dead, and Serapis of Italy, which are now in the Museum of London. They were superbly detailed out of white marble. Further, many local clay figurines of Venus, brushing her hair were found that is also now on exhibition in the Museum of London.

What I could see was the traces of the nave, apse, and altar. It gives a feeling that the disciples must have been sat on any of the sides of the nave and among the bases of the columns still present.

Finally, the guide told me that the archaeologist also found the not well-preserved head of Mithras that was identified with his Phrygian cap and fit enough for the upper body. Further, they could discover a marble relief of Mithras where he is shown killing the cosmic bull, whose importance to Mithraism is as equivalent as the Crucifixion to Christianity. The relief exhibits the tough man along with the two small portrayals of the celestial twins of Light and Darkness having a torch, Cautes and Cautopates, and the astral annual zodiac wheel.

He further mentioned of the presence of the three more scenes outside the wheel where at the top left, SolHelios departs towards the heaven in his Biga (vehicle); Luna comes down via his chariot at top right; and that the chiefs of two wind-deities, Boreas and Zephyros, are displayed at the base.

Perched high on the Sahyadri Hills of the Great Western Ghats is located in isolation one of the most revered temples of religious unity in India, the famous Sabarimala Temple. The Sabarimala Temple which is considered to be the abode of the protector of the land of Kerala Lord Ayyappan is said to have been […]

Himachal Pradesh is considered to be the crown of North India and is also famous for its spiritual value. The most dominant presence that is worshipped here consists of Devis and goddesses making it a prime destination for Shaktipeeth Darshan. People from all over the world flock here to worship the various forms of goddess […]

10 Things I Wish I’d known Before Traveling to Russia