Whether you’re just off the plane, sitting down to eat, or trying to get home after a night out, tourists in Thailand have a target painted on their back almost any time they leave their hotel. The country is full of characters to watch out for, but thankfully the average Thai can be friendly and helpful.

The very first thing to know is that official assistance should not be counted on to get you out of a jam. In some cases, they’re the ones that are out to rip you off, and it’s probably best to pay what you need to in order to escape an awkward situation.

The insides of a Thai jail cell are probably not what you came to see. With that said, the target on your back won’t go anywhere – you just determine the size by your actions, look, and demeanour.

Consider these the most common things to watch out for, not an end-all-be-all list:

“The Grand Palace is closed today.”

Virtually every blog and guidebook about Thailand warns about this, yet it’s surprising how many people get suckered into this. The authorities on-site seem powerless to do much, and the tourist is often led to jumping in a tuk-tuk or joining a tour of the city.

That ride will stop at their friend’s jewellery store, restaurant, and possibly a place you actually asked to go. In any case, you’ve been outed as a mark anyone can take advantage of.

Frankly, the Grand Palace is overpriced (at 500 baht for a foreigner, though it’s free for the locals), and is the biggest tourist trap in the country.

Still, if you go, arm yourself with facts – the palace rarely closes to the public. It does close at 3:30pm, and the dress code is strictly enforced (e.g. men with guns will point them at you if you try to enter the palace improperly dressed.) You can borrow a cover-up for a nominal fee on-site. Cover your knees and shoulders and you should be fine. For more specific details, see Tourism Thailand’s official page to the palace.

You have a couple ways to respond. Walk on if you like, or have some fun with the guy. Speak some French or Tagalog to the guy. Ask him the time of day. Make him dance like a monkey. Have him point out the nearest Tourism Authority of Thailand office on the map, or ask him how many tourists he’s ripped off in the past week. 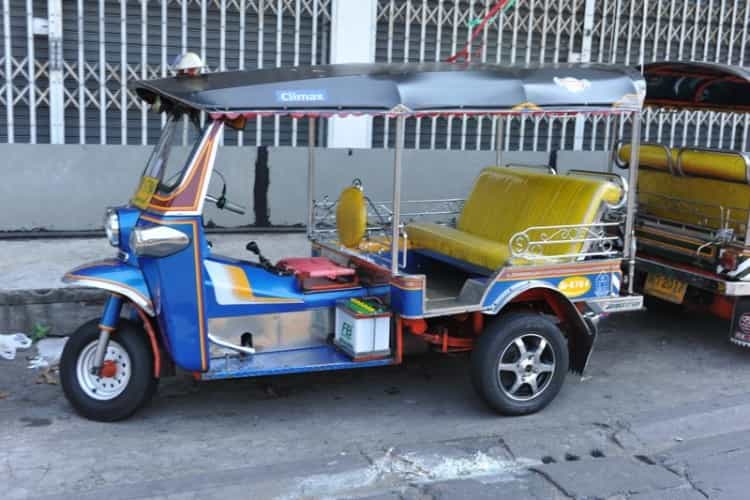 The tuk-tuk driver. By no means should this person be listened to or trusted beyond his own incentives.

The industry is as shady as they come, and there’s no official pricing system followed anywhere at anytime. In short, jumping into a tuk-tuk means you’re going to get taken for a ride in multiple ways. Avoid unless absolutely necessary. 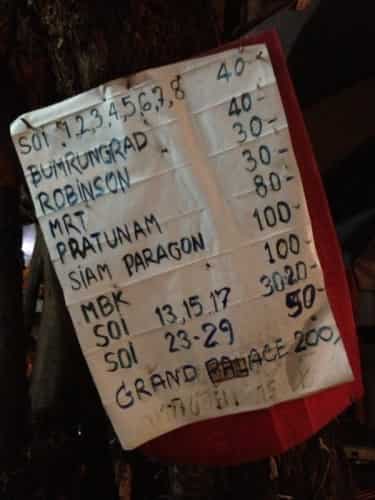 Along the same lines, but rarer, are the dual-pricing systems seen across the country. This is most common at destinations (National Parks and other government-run attractions are the worst), but is also seen at motorcycle taxi stands as above.

These are 2-3 times what a local will pay for the same trip. If you come to them and point to the sign, that’s the price you’ll pay – not a bad rip-off per se, but I hate paying more than the locals when a modicum of research can avoid it.

The ‘no meter’ taxi driver. Bangkok’s taxis have a well-earned reputation for turning away customers or threatening violence against their fares.

Even as a resident of the city, my foreign face got me the ‘no meter!’ line, and there’s no negotiating with them. There’s really no way to respond to this, as your destination, your backpack, or the time of day has already painted the target on your back.

Your negotiation skills will not work against a belligerent driver who is more than likely carrying a weapon of some kind at close reach. Unless you happen to have a machete handy, I’d advise not pissing them off.

Note that while it’s unlikely, a driver may legitimately be going off-shift or need to refuel. Look for the detrius that accumulates when you’ve driven 10 hours or an empty fuel tank to verify this.

The good news: in Bangkok, there are other options in 95% of the places you’ll go as a tourist. You may need to wait as a bus station or ask at a 7-11, but there’s almost always another way.

While I don’t recommend using them often, even a tuk-tuk may end up being a cheaper way to get home than an extortionate taxi fare. Then there are the motorcycle taxis, simply walking, the BTS / MRT…

The airport taxi driver really should be called out as a special level of greedy. For ‘only’ 700 to 1,000 baht you can be taken from the airport to your hotel or destination.

They won’t tell you, of course, that the Airport railway connects Suvarnabhumi Airport to the rest of the subway / BTS system (learn more at the official site – http://bangkokairporttrain.com/time-table-route.html).

While it might be worth it if you’re transporting several people and lots of luggage, you’re paying a princely sum for the privilege.

If you’re arriving at Bangkok’s other airport, Don Mueang, shuttle buses wait right outside the exit to connect you to the BTS / MRT for 30 baht (same price for locals and tourists).

Check your bill to ensure a switcheroo hasn’t been made – and count your change as well. I’ve received incorrect change and been billed incorrectly on many occasions.

This is unusually not meant to deceive, but still relieves you of your money. Count it before it goes into your wallet or purse. 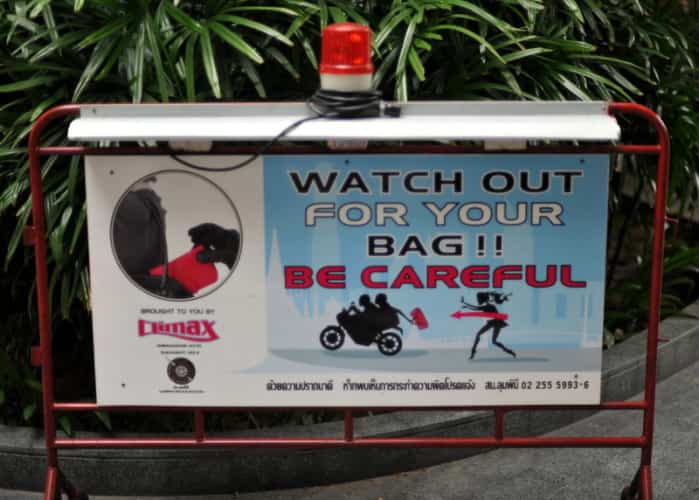 A couple other things to note, in brief:

If you rent a scooter to get around, wear a helmet. This is probably the easiest way to find yourself being pulled over by a Thai cop. Once they’ve stopped you it’s trivial for them to find something else to make the future bribe a richer one for them.

Anyone selling jewelry, fake ID’s, fake diplomas, or an upper-class brand name is most likely a scam or fake. It’s a different story if you’re in one of the malls, but why pay the mark-up and import taxes? Do the math back to your home currency before buying.

If drinking, try not to get sh!t-faced drunk. You’re already a target, and your drunken behavior makes your profile a lot higher than you want it to be.

In general, you’ll be wise to keep your street smarts and wits about you. There are friendly people out there, but they won’t be approaching you.

Founded in 1296 this city is located in the hilly terrain regions of Northern Thailand. The entire region of Chiang Mai is adorned and decorated with a number of pilgrimage spots and holy sites of spirituality. Literally meaning ‘the new city’, this place has a lot to offer to every type of traveler. If you […]

In places such as Chiang Mai, transportation information and prices aren’t readily accessible to tourists, making it extremely easy for foreigners to wind up spending two to three times more than they should on a taxi or Tuk Tuk ride. And after spending between one to two weeks vacationing in this city, the expenditures add […]

7 Notable Towns to Visit in the Nation of Barbados

Best 5 Attractive Tips To Have A Safe Trip