Known as the Palace of Peace and Harmony Lama Temple, the Yonghe Gong Lamasery is a temple in the northeast of the China’s capital city Beijing and is dedicated to the Tibetan Buddhism. Deserving your visit, the temple is a well preserved religious monastery and among the largest of its kind on Earth. Holding 17th-century colorful architecture, the art and the structure provide a mix of Han Chinese and Tibetan styles.

Constructed at the reign of the Qing era, its work began in 1694 that initially was the court of the Prince Yong (Yin Zhen) – the son of the Kangxi Emperor. After being thrown in 1722 as Emperor Yongzheng, 50 Percent of the structure was made a monastery for Tibetan Buddhist monks. His successor, the Qianlong Emperor, provided a royal grade to the Yonghe Gong temple by replacing its turquoise tiles with yellow tiles kept for the emperor. The complex is open from 09:00 to 16:00 and has an entrance fee of CNY 25. 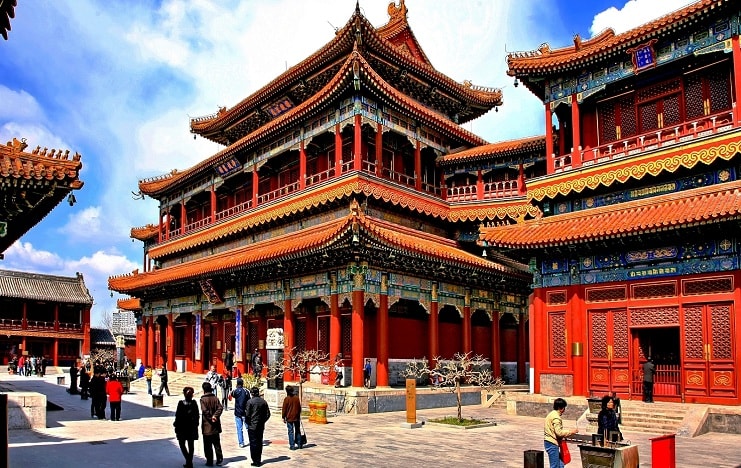 The Yonghegong temple sits along a north-south central axis of 480m with the main gate at the south tip. Split by the courtyards, there are five main halls namely, Hall of the Heavenly Kings (Tian Wang Dian or Devaraja Hall), a Hall dedicated entirely to Harmony and Peace (Yonghegong), a peaceful Hall of Everlasting Protection (Yongyoudian), a Hall which represents the Wheel of the Law (Falundian), and a whole Pavilion dedicated to Ten Thousand Happinesses (Wanfuge).

The Hall of the Heavenly Kings (Yonghe Gate):

Located at the extreme south, this was initially the main entrance for the lamasery. In its middle, a statue of the smiling Maitreya Buddha is seen along the statues of the four Heavenly Kings on sides of the walls. In the east, the northern Heavenly King carries a snake and treasures, while the southern King grasps an umbrella and a silver mouse. On the west, the southern King is shown with a sword, while the northern one has a Pipa (an ancient Chinese musical instrument). When you leave the hall, an old copper cooking vessel of 1747 is seen in black with white marble stone, which is one of the three rarest things in the city.

The Hall of Harmony and Peace:

This is the main edifice that hosts three bronze Buddha statues, Shakyamuni (Present Gautama Buddha) in the middle, Kasyapa Matanga (Buddha of the Past) on the right, and the Maitreya Buddha (Buddha of the Future) on the left. There is also a picturesque mural on the west wall depicting the Avalokitesvara having thousands of hands and eyes. On both the sides of the hall, the statues of 18 Arhats are seen.

The Hall of Everlasting Protection:

This is precisely the residence of the Emperor Yongzheng when he was as a prince and the tomb site holding his coffin after death. Now, you can worship a statue of the Bhaisajyaguru (Healing Buddha).

The Hall of the Wheel of the Law:

Located towards the north of the previous hall, this hall is the home for reading scriptures and performing Buddhist rituals. Its architecture exhibits the Tibetan and Han styles making it very special. Formerly the abode of the Emperor’s wives, it now holds a giant statue of Je Tsongkhapa (Lamaism ancestor and founder of Geluk School) with offerings. At the rear of this statue, you will come across the sacred Arhat Hill holding 500 statues of arhats exhibiting various poses. The hill is carved from red sandalwood, while the arhats are the result of artistically blending the five different metals – gold, silver, copper, iron, and tin. Along the walls, great frescos tell you about the life of Sakyamuni.

The Pavilion of Ten Thousand Happinesses:

This is the final palace, but the highest one to marvel due to its three storeys. Here, tens of thousands of Buddhas are seen along. The middle part of this hall is blessed with a huge 26 m statue of Maitreya sculpture from white sandalwood on a white marble base. This work along with the other two are a park of the Guinness Book of Records.

When planning a trip to China, preparation is important as you are not only leaving the country, you have to follow China’s guidelines for entry and touring the countryside and cities. Not only do you have to know what paperwork to take, you should know the best times of the year to take the holiday. […]